Peter Br: The Ink is Gone

By CLIFFORD ALLEN
October 3, 2003
Sign in to view read count 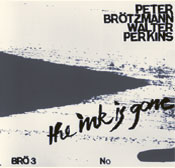 In jazz, surprise meetings often produce some of the greatest results. On paper, the duo of Anthony Braxton and Max Roach might look a little strange, ditto the two-tenor front line of Archie Shepp and Hank Mobley. When successful, these meetings can be, like the old cliché, peanut butter and jelly. Thankfully, the crusts remain on this duo recording of German saxophonist Peter Brötzmann and soul-jazz drummer Walter "MJT" Perkins.

The Ink is Gone was culled from two nights of live performance. Unlike other Brötzmann recordings of late, it is a vinyl-only release on the private Brötzmann imprint (in a hand-silkscreened edition of 999). The revival of BRO showcases the saxophonist's interest in making an entire aesthetic package, with both music and art culled from the same mind. Brötzmann has always had a hand in the visuals of his recordings, and the uniqueness of his vision contributes to the beauty of pieces like the "concertina" cover of the original Nipples. On previous BRO releases (BRO 1 and 2 were the original versions of For Adolphe Sax and Machine Gun), Brötzmann even hand-stamped the labels with a herald of his own design. It remains to be seen whether the new BRO records approach this level of artistic detail, but if nothing else, they offer a texture, unity, and even a smell different from the usual package.

Brötzmann's list of regular drummers over the years reads like a who's who list of avant-garde percussion innovators: Han Bennink, Louis Moholo, Hamid Drake, and recently Milford Graves. Perkins, though seemingly not a logical match for a saxophonist whose tenor is heir apparent to the Reverend Frank Wright, is actually the type of subtle player that Brötzmann might need. Perkins has a great sensitivity toward situational dynamics, and as any seasoned veteran of improvisation would realize, the key to making a first meeting work is "laying out" more than "laying it on."

This is quite evident on "Permanent Migration," which showcases Brötzmann's taragot, a Romanian single-reed instrument that sounds at once like a soprano saxophone and a shenai. Never has the taragot sounded so right in the saxophonist's hands as when Perkins lays subtle cymbal splashes behind it, slowly building rhythms until the reedist's dance approaches ceremonial fervor. Nevertheless, there are moments when Perkins' relative inexperience with the language of free percussion shows through; continual press rolls and breaks don't always match Brötzmann's phrasing, and a slight rift in communication sometimes develops in the denser passages. Maybe with more time and exposure to free playing, Perkins would, like Art Taylor and Max Roach before him, become a solid free jazz drummer.

Despite the shortcomings that result from a slight case of unfamiliarity, the meeting of Brötzmann and Perkins is a successful one, each player showing sensitivity to the other's language— and as the tendency toward sparseness grows in Brötzmann's work, the right drummer is even more important. One technical note, however: there is a bit of pressing crackle for the first minute or so of side two that is noticeable. Other than that minor quibble, the whole package is a welcome installment in each musician's opus.

Side 1: Boot the Bastards Out - The Ink is Gone - The Beast-filled Dark and a Beautiful Forest. Side 2: Permanent Migration - Grass Flowers the Wind