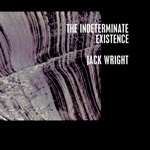 The liner notes to The Indeterminate Existence, penned by Jack Wright, indicate that he no longer plays music like what can be heard on these seven tracks from the years 1988-98. While I might disagree, I will note that any occasion Wright steps onto a stage, you will hear something new, conceived and created in that moment.

The seven solo pieces Wright refers to here are all physically demanding note-after-note marathons. What Wright refers to in his liner notes is that he no longer plays to this degree of exhaustion. Instead he favors the pacing of silence, interplay and quietness.

In Baltimore in 1988, documented on the first two tracks, he spits notes in a stilted manner, much like Thelonious Monk jabbed the piano at times. This wrenching exorcism is a rush to express as many thoughts as possible, through a machine-gunning saxophone. Ten years later, in Berkeley, he's still at it. The "Tenor piece best exemplifies the "old" Jack Wright. He probes, picks his way through some advanced math theorem he's formulated in his head, or perhaps some poetry and meter he has fixated on from a vending machine, or a remark someone uttered as he was preparing to go onstage. Wright's muse sends him in multiple directions—extending the saxophone beyond breath, beyond melody, beyond touch. He touches upon the pureness of sound, energy and the subconscious.

Fans of Evan Parker's extended blowing should find these sessions valuable listening experiences. Where Parker may have an all-too-familiar menu of sound from which he draws, Jack Wright constantly invents a new language of sound. He packs these pieces with flutters, honks, slaps, vocalizations, tweaks and breaths.

This exhausting document is a valuable insight into a truly remarkable improviser.