Michele Rosewoman and Quintessence: The In Side Out 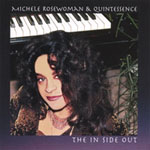 The In Side Out is stimulating, unpredictable, and groove-centric. Though Michele Rosewoman's recent involvements have included writing big band charts, performing solo piano at Yoshi's, working with Robin Eubanks' EB3 ensemble, duo concerts with Greg Osby and extensive educational activities including a two-day residency at Berklee School of Music, it's been six years since the pianist's last recording as a leader.

Now the composer/bandleader is back with her evolving Quintessence ensemble—a quintet that has included forward thinkers like saxophonists Greg Osby and Steve Coleman—performing progressive jazz fueled by a distinct mix of funk, avant-garde, bop, and Afro-Cuban musical influences.

Her new music is harmonically complex, filled with odd-metered tempos and tricky instrument sections; it's enhanced by musicians who pull it all together, including rising saxophonists Miguel Zenon and Mark Shim. Shim's unique voice is featured heavily throughout the recording, as well as his production of three compositions. His signature growling tenor provides the bite, while Zenon brings smooth lines via alto and soprano. Added is the strong rhythm section of bassist Brad Jones and drummer Derrek Phillips, as well as a few special guests who help articulate the pianist's prolific ideas.

Rosewoman shows plenty of diversity throughout the recording. On the angular funk of "Warm she trades fluid Nord Electro keyboard licks with Dave Fiuczynski's groovy electric guitar as the band digs deep into the pocket. On the intricate "Link she plays a rapid and probing acoustic piano with heady comping and elaborate soloing reminiscent of contemporaries like Edsel Gomez and Geri Allen. "Guapo is not for the faint of heart: Phillips and Jones hold down a circuitous pattern that takes sudden twists, with Shim delivering a smoking tenor solo; its electronic alter ego, "Guapo Remix, would feel right at home in dance clubs.

It might seem that this myriad of styles would be conflicting, but Rosewoman pulls the threads together nicely, as on "Eshu Laroye," featuring three-part vocal harmonies and guest performances by percussionists/vocalists Pedro Pablo Martinez and Olu Femi Mitchell. Include the mystique of "The ER, which is based on a consistent conga pattern, and the brilliance of "Advance Dance, a commissioned piece featuring labyrinthine tempos and solos. Rosewoman reflects, "I like the mood and the accidents that happen as we hit the cracks of time, the spaces between the spaces between the beats.

The recording ends on a good and funky note with R&B legend Marvin Gaye's "Life is for Learning, on which Rosewoman provides sultry vocals. The In Side Out has it all: intellect, spirit, and soul. And it's a fine display of one of jazz's leading (albeit lesser known) female artists, one who won't be easily categorized or boxed in.

Cuerpolarity; Warm; Link; Guapo; Guapo Remix; Eshu Laroye; With You In Mind; The ER; The Fineness Of; Advance Dance; Life is for Learning.

Title: The In Side Out | Year Released: 2006 | Record Label: Advance Dance Disques