The Hunterdon Hills Are Alive With Jazz 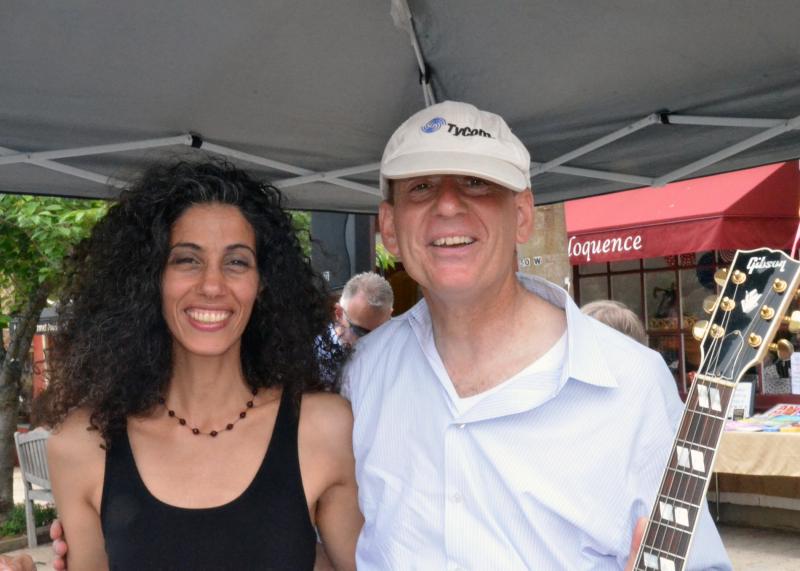 By GLORIA KROLAK
October 31, 2015
Sign in to view read count

Kantarra, by all appearances, could be the girl from Ipanema herself.

The town of Clinton in the green, rolling hills of Hunterdon County, NJ, celebrated her 150th birthday last May and, for an old lady, she looked downright spry. Town planners observed the sesquicentennial with a jazz quartet they know well. Guitarist Arturo—he goes by his first name—and some iteration of his group play the outdoor gig on Main Street every other Friday evening in the summertime. On this Sunday afternoon, the cordoned-off streets gave way to a canopy underneath which the foursome was mostly contained. Along with Arturo, vocalist Kanttara Naba, saxophonist Tom Marciano, and drummer Jim Jacobus lit it up like candles on a birthday cake.

As strollers, both afoot and wheeled, drifted in from both directions of Main Street to this central location, the band offered a sweet rendition of "Better Than Anything," a perfect tune to introduce Ms. Naba's easygoing style. In the course of the afternoon they pleased audiences with standards like "All of Me," Jobim's "Quiet Nights," "Darn That Dream" and non-jazz songs translated into jazz, like the folk rock hit of 1969, "Everybody's Talking At Me."

Arturo cut his musical chops on the cowboy songs his father loved, but these days jazz, in particular Brazilian jazz, and the American songbook, consume his playing. The guitarist writes his own arrangements for guitar and female voice—the male voice competes with his guitar's range—and, instead of a band, he has a dozen or so favored musicians he calls upon for each venue he plays. Necessity being the mother of invention, Arturo learned to play both harmony and bass parts to accommodate for the bass when performing as a duet with a vocalist. For that he found a standard Gibson J185—not the Gibson archtop that most jazz players use -is his musical companion.

Kanttara is aptly named—"cantar" is the Spanish and Portuguese verb "to sing"—which she does as easily as she speaks, belying her sturdy foundation in the art. Although she has mastered many styles, Kanttara, by all appearances, could be the girl from Ipanema herself. Except that she was born in Israel, served in the Israeli military as a band vocalist, and performed on TV and in theater productions there. Then it was on to the States to further her career. Kanttara also teaches, writes music and is currently working on a recording. Her singing Facebook invitation to "like me" is an original delight.

Marciano plays both tenor and alto sax, but containment frustrates him. The square under the canopy was cramped and he needed to break out. So he wandered the street, crossing over to the restaurant Dora, luring fans back to his base, literally carrying the tune. Born and educated in New York State, Marciano has played the sax since he was eight. He names John Coltrane, Stan Getz and Charlie Parker among his strongest influences.

Jacobus credits the Beatles with his decision to take up the drums. He studied for many years with the late jazz drumming legend Joe Morello, and helped him write articles for Modern Drummer magazine, and Morello's instruction book, Master Studies II.

Arturo and his group perform, as mentioned, every other Friday night in the summertime across the street from Dora, one of Clinton's prime dining venues. Owner Rudy Hisena is a successful restaurateur—he also owns the Italian Bistro in Highland Park, which treats diners to jazz Thursdays through Sunday evenings year 'round. You can catch Arturo and company indoors too at various venues around the state in the colder weather.

Another unexpected summer jazz venue: Sunday afternoon picnics at Bobolink, a bountiful dairy farm in the Milford countryside. Sit on the lawn or under a tent and enjoy some local and Philadelphia jazzmen and women who come out to entertain. Next season, bring your own food or buy the freshest burgers you may ever eat. The farm store is open all year—keep your wallet handy because you'll want to bring home some of their mouth-watering cheeses, breads, meat and fresh eggs. Bring your own chairs, watch the cattle sauntering on the hillside, maybe even take some cow pictures.