By BRUCE LINDSAY
September 30, 2013
Sign in to view read count 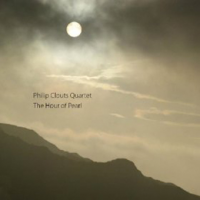 The Hour Of Pearl—a title taken from John Steinbeck's Cannery Row—is the second album from the UK-based Philip Clouts Quartet. A melodic collection of original tunes, it combines lightness of touch with a rhythmic sensibility: a winning combination.

Pianist and composer Clouts was born in Cape Town. Although he moved to the UK in his infancy, the family home was filled with the music of his homeland, Abdullah Ibrahim and Chris McGregor proving to be especially influential on Clouts' development. In London, Clouts led Zubop and ZubopGambia, two bands steeped in the music of South Africa and many other nations.

Clouts now lives in the small coastal town of Lyme Regis, in the south-west of England. Known by some as "The pearl of Dorset" it's a place noted for its annual Fossil Festival and an appearance in Jane Austen's novel Persuasion. It's not noted as a hotbed of jazz, but this quiet, rural setting has, along with his South African homeland, inspired much of Clouts' music on this album.

Clouts is joined by saxophonist Carlos Lopez-Real, a member of London's e-17 and F-IRE collectives, bassist Alex Keen and drummer Jon Debruslais. From the relaxed swing of "On West Hill" to the restrained beauty of "Nyasa Lullaby" the quartet shows an ability to craft immediately accessible tunes that also repay repeated listening, revealing their subtleties of harmony and texture as they become more familiar.

Despite the title, "Riptide" is a smoothly flowing, mid-tempo tune which gives Lopez-Real a chance to showcase his lyrical alto saxophone. Elsewhere, on "Nyasa Lullaby" and "Clef Mona" for example, he favors the soprano sax. Clouts' piano is heard to particularly fine effect on "Delta," his combination of bright, sparkling, single note runs and chordal playing giving the tune its rhythmic punch as well as its melodic flow.

Keen and Desbruslais take few solos but their work is key to the rhythms and moods of The Hour Of Pearl. Debruslais' brushes and Keen's economically spacious bass line do much to give "As Evening Falls" its calm beauty, underpinning Lopez-Real's sax and Clouts' piano to create a standout tune on an album of quality.