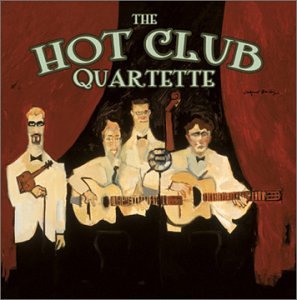 To no one's surprise based upon the cover art and instrumentation, this is a genre piece specifically aimed at the evocation of the Django Reinhardt-Stephane Grappelli Hot Club group. There are fourteen tracks of which four are Billy Steele originals, four standards from the era and six songs reflecting the Django-Grappelli playlist, including "Ultra Fox," which the two composed.

So, does it all work? I've heard a fair amount of this music per the renaissance of the Hot Club of France during the past decade: Sinti, The Rosenberg Brothers, (some) Biréli Lagrène, Robin Nolan, Hot Club de Norvege, even some Frank Vignola. Am I forgetting anyone? Billy Steele the lead guitarist and Benny Brydern on violin are the heart and soul of this group and they sound correct in their emulation. How good is Brydern in relation to Grappelli? Well as my long-deceased uncle (the family comedian) would have said: "Only Henny Youngman would know." In other words, he plays a hot fiddle alongside the hard-working Steele and they sound good.

In addition to the above duo, Tom Marion on rhythm guitar and Dave Jones on bass work hard to complete the group sound. It sounds like this could be used as the soundtrack of a period Woody Allen film like Sweet and Lowdown (which was about the search for Django). The tunes, whether originals or standards, all sound authentic. Interestingly enough, they have chosen not to include the most popular Hot Club-associated songs like "Nuages."

The group hails from the Los Angeles area, with only Brydern coming from Germany. It will be interesting to chart their progress in future endeavors.

About The Hot Club Quartette