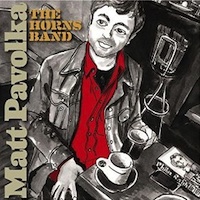 I played Matt Pavolka's The Horns Band for a friend who immediately noticed that the very impressive list of acknowledgements contained more nods to literary and intellectual heavyweights such as Jose Saramago, Cormac McCarthy and Soren Kierkegaard than to musicians (the band members and Guillermo Klein). Perhaps Pavolka's intent was to show that he's interested in things besides music. Or maybe these literary companions were just as important to the development of his multi- faceted modern jazz compositions as the musicians he's been hanging around with. Nevertheless, Pavolka's been working with the best of the best of late. An abbreviated list would include jazz legends Paul Motian and Lee Konitz, plus Ben Monder, Chris Cheek and blues-rocker Jay Geils. His website is a hoot, and there's a prominent picture of Pavolka reading a book. He's got a book on the album cover as well. Hmmm.

On The Horns Band, Pavolka's second as a leader, the Brooklyn-based bassist and occasional trombonist has gathered a group of exceptionally sharp young players to give life to his distinctive original compositions. I'm at the point where the names Kirk Knuffke, Loren Stillman, and Jacob Garchick are enough to pique my interest in anyone's album. These guys always have interesting things to say on their respective instruments. They've played together a lot in a variety of musical contexts, and they've developed a unique sort of chemistry that really shines through on The Horns Band. Much the same can be said of drummer Mark Ferber, whose playing blends the crisp precision of Roy Haynes with the ebullient, almost goofy, forward motion of Joey Baron.

Pavolka's a wonderful bassist, but his compositions really steal the show here. Mostly multi-sectioned, with different tempi and contrasting harmonic centers, they come across as soulful and complex rather than merely difficult or complicated. That's an important difference. Several of them—"The Evening Redness In The West" is a prime example—have a subdued, almost mournful Euro-jazz feel to them, which contrasts with the impassioned soloing. "The Night That The Blind Man Dreamt He Went Blind" has a similar moody atmosphere, with Stillman playing the plaintive theme by himself over the rolling, bounding rhythm before the other horns repeat it with the altoist, blending in subtle variations on the fly. Subsequent sections feature collective improvisation, a fugue-like horn chorale and some proto-minimalistic moves.

Pavolka also likes to play around with layered and modulated rhythms, and does so quite effectively on two completely different pieces; "Guermo," and "Vheissu." The latter features Pavolka on trombone, and gives quite a bit of solo space to Ferber while the horns play the knotty theme. A self-effacing player, Pavolka doesn't solo too much here, though he steps out at length, and quite convincingly, on the otherwise-giddy "Recollected Forward." Two gentler pieces round out this wonderful album. "The Evolution of Artificial Light," which takes its title from a book by Jane Brox, is a meditative canon with Knuffke out front. The warm, friendly "Lullabye" has the mellow "aw shucks" demeanor of a Bill Frisell piece. Pavolka takes a fine solo on this one, as well. Varied, unpredictable, and beautifully executed, The Horns Band is an absolute gem of an album.