By WADE LUQUET
February 8, 2012
Sign in to view read count 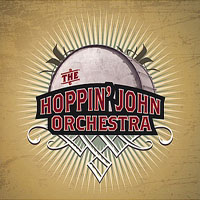 Bands outside of New Orleans who claim to play New Orleans style are generally like cooks outside the city that claim to cook its cuisine—it's a noble attempt and tastes good, but they often do not quite get it. There always seems to be one ingredient missing. The Philadelphia-based Hoppin' John Orchestra gets it. This sixteen year-old New Orleans-style brass band has the feel and the sound down, and its self-titled CD exemplifies this with powerful horn solos and a grooving rhythm section. Under the direction of trombonist, bassist, and composer Mike Hood, it features some of Philadelphia's top jazz and brass players, along with two excellent singers.

More orchestrated along the order of the Dirty Dozen Brass Band, with piano and guitars rather than the brass and drum street groups like the Rebirth Brass Band, The Hoppin' John Orchestra CD features six original tunes by Hood and five excellent covers. Darren Keith's syncopated drum beats Brian Cox's tuba grooves hold the band together in Hood's skillfully written and arranged second line numbers. His laidback "Melvin Purvis Gets His Man" features the horns playing confidently as a group, with beautiful solos from trumpeter Matt Cappy and Tony Gairo, who proves to be an impressive musician throughout the CD, seamlessly switching between saxophone, clarinet and flute. The tune also includes a smooth guitar solo by Joe Napoli.

A cover of Dave Bartholemew and Pearl King's 1955 hit, "I Hear You Knockin,'" features superb slow drag tuba, passionate, soulful blues singing by John Conahan, and a tight brass section. The band's cover of Allen Toussaint's R&B tune "Nothing Takes the Place of You" is played with a rhythm to which most New Orleanians will recall slow dancing at high school Sock Hops. This sad love song is sung passionately by Lauren Lark, whose voice is reminiscent of a young Irma Thomas.

Hood's writing—and his arrangements of second line and brass band tunes—demonstrates a real understanding of this type of music. New Orleans music is sort of like beer—it almost always tastes better at the tap. But in this case, an exception can be made. Under Hood's capable direction and with superb musicians, The Hoppin' John Orchestra has managed to bottle the New Orleans sound and ship it to Philadelphia, while maintaining all of its flavor.

Bayou Biscuit; I Hear You Knockin'; B.B.'s Second Line; Nothing Takes the Place of You; Crash!; Melvin Pervis Gets His Man; Le Petit Quadrille; Caravan; Dawn of the Desert; 12 x 6; All Alone.

About The Hoppin' John Orchestra