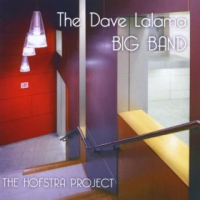 As an academic, pianist Dave Lalama's resume includes being a founding faculty member of the prestigious Manhattan School of Music Jazz Program, as well as a current professor at Hofstra University where hundreds of students, colleagues and musicians have all been a part of his distinguished professional life. As a musician, his background includes performances with many legendary bandleaders, among them Woody Herman, Buddy Rich and Mel Lewis. The combination of having worked with so many talented musicians throughout his career as well as experiencing the big band landscape with the best in the business, culminated in the decision to form his own 17-piece big band comprised of Hofstra alumni, faculty members and guest artists for the purpose of sharing his love for the art of making jazz music.

Original tunes like the sizzling opener "Full House," "No Evidence," "St. Thelonious" and "Blues For..."all make quite an impression. Originally penned for the Buddy Rich Big band, "This Song Isn't You" is the other original that stands out especially since it features renowned brother Ralph Lalama on tenor saxophone, as well as solo spots from Mosca, Drewes and Tedesco. The fresh arrangement of "Moody's Mood For Love" is definitely an album highlight probably destined for repeated airplay—that's just how good this one sounds.

Oscar Pettiford's standard "Tricotism," and "The Peacock" by Jimmy Rowles are two completely different but just as terrific pieces. The first a blazer and the latter a soft beautiful ballad featuring a warm-toned baritone solo from Jeff Lange presenting one of those not-to-be missed highlights of the recording. The outstanding original charts and the exciting new arrangements of well-known jazz standards, are two key contributions to the positive impact The Hofstra Project will leave on audiences. Just as important is the seasoned cast of players and the musicianship of The Dave Lalama Big band, which deserves a grade "A."

Full House; Where Are You; No Evidence; Duke Ellington's Sound Of Love; Inner Urge; Pent-Up House; Moody's Mood For Love; St. Thelonious; Tricotism; The Song Isn't You; The Peacocks; Blues For...; Evansville.