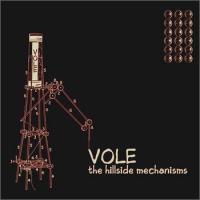 Three stalwarts of the London Improvisers Orchestra come together on the debut outing of the genre-mashing Vole. When playing credits number saxophone iconoclasts Peter Brötzmann, Evan Parker and Ingrid Laubrock, bassist Simon Fell and pianist Alexander Hawkins, then energy and imagination can be almost guaranteed. What's fascinating is how they align improv with noise, heavy metal and prog outbursts, sometimes within the space of a single cut. Although there are some clearly scripted sections, the whole program is ascribed collectively, reflecting a shared conception realized through close-knit interplay.

Guitarist Roberto Sassi proves fundamental to the diversity. He takes on multiple guises veering from rocky bombast to scratchy pointillism, and occasionally taking on bass duties or laying down washes of ambient electronics. Trumpeter Roland Ramanan handles most of the melody lines, but also delves into half valve effects and utilizes an array of mutes to broaden his expressive palette. On drums, Javier Carmona matches every shift with a detailed, even nervy, response: crisp when required in the ensembles but tippy tappy and jumpy at other times.

In the liners Ramanan alludes to the threesome's penchant for setting each other problems with the expectation that they will work something out to provide a resolution. Perhaps the best example of how they deal with such conundrums comes on "Tim's Frosties" when a tricky unison line gradually unravels into three divergent strands of darting trumpet, scrabbling guitar and asymmetric drums. Somehow after eight minutes of spirited exploration, the strands are re-united. What's noteworthy is how captivating they make the process.

Not everything exudes such intensity. "Voiced Unvoiced" passes as a reflective skewed ballad, while "Improctober" pitches the trumpet like some baying animal in a sonic twilight of drones and indeterminate sounds. Ringing the changes once more, the final "Before" opens with Ramanan on oriental wood flute prior to channeling Don Cherry in a wistful world music vibe. Whatever the combination of inspirations, Vole makes the result its own. A unit to follow closely in the future.