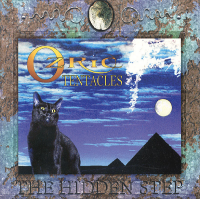 Ready to climb the pyramids and then walk out onto the hidden step, to enter the unknown ascending passages, to stare into ancient constellations of the near future, to see Ka's wings glisten in the obsidian-eyes of Anubis and hear the echoes of synths and axe across the Nile?

Then follow the Ozrics across the desert of mainstream music's boring wasteland and taste of the oasis of genius via the eternal song of Ed and gang. They are back! And what of that "song that remains the same"? What of that twisted and spiraling jam that only the Ozrics can weave? Yes, they do it again herein with an eye towards ancient Egypt and those ever-deepening occult mysteries.

The bizarre-hip-cool synths remain, the wild guitar still screams, the polyrhythms swell, bass doth boom weird, and the insane piping of flute persists. Sometimes I think the Ozrics are destined to awaken Cthulhu with their cryptic song-smithing and manic delivery. I have heard of their live shows being beyond description and descending upon the audience like spectres from Stonehenge's first rites.

I refuse trying to describe this music as the deeper I attempt to analyze it the more the beauty falls away into reason vs. just letting the Ozrics "do me in and envelop my psyche." Excuse me folks, I need to stop typing and begin swirling aneath the full moon . . .