The Helping Hands Of Oz Noy

By DAN BILAWSKY
November 10, 2012
Sign in to view read count
Jazz Heaven rolled out its initial wave of instructional DVDs in 2011, entering the market with a slew of top-quality offerings that showcase modern-day monsters doling out their hard-earned wisdom for eager students willing to listen and learn. Each disc in that batch, which includes outstanding entries from drummer Ralph Peterson, saxophonist Jerry Bergonzi and several other notable figures, delivers something special and different, with each instructor putting their art and soul into their work.

These musicians target specific content areas that may be a mystery to up-and-coming jazz students, and they serve an important function in doing so, but only so much can actually take place during a single video master class. Certain topics weren't covered during that roll out and some instruments, like the six-string beast known as the guitar, didn't receive their due. That's where these discs come in. Oz Noy was drafted to lead the guitar charge as a new wave of Jazz Heaven releases trickle out and he does a fine job on two distinctly different videos.

The Israeli-born shredder, who arrived on American shores in the mid 1990s, has lent his admirable chops to various projects of all stripes and colors, but jazz fans have come to know him as a down-and-dirty groove-meister with a take-no-prisoners approach to playing. It's this side of Noy's personality, along with his keen theoretical intellect, that comes through loud and clear during these divergent discs.

Guitar Improvisation Workout is all about chords, scales and how the two connect in an improvisational setting. Noy looks at improvisation as the relationship between melody and harmony. He provides a scalar vocabulary that can serve as an entry portal into the art of soloing and he addresses the idea of viewing certain scales and patterns as different aural colors.

Noy posits that all chords can be divided into three categories, based on the quality of certain scale degrees in the chord, and then he proceeds to align various scales with these different chords. He outlines the spelling of mixolydian, pentatonic, altered, diminished and whole tone scales, and demonstrates exercises that can help an improviser to become more fluid when using said scales. Patterns built around thirds and fourths, arpeggios, and triads are all part of the package as Noy demystifies certain aspects surrounding the art of the improviser.

Accompanying PDF files and a 50-minute interview give added value to this information-filled disc, furthering the ability of students to dig deep into this material in the comfort of their home. Noy outlines his own development in the interview, discussing his early years, his fascination and confusion surrounding an encounter with George Benson's work, and his musical meetings with rhythm section A-listers like bassist Will Lee and drummer Vinnie Colaiuta. 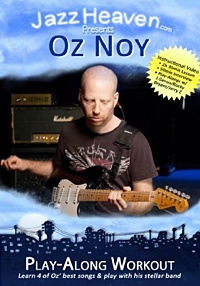 While the information contained on Guitar Improvisation Workout can make it a valuable tool for non-guitarists and guitarists alike, Play-Along Workout is strictly for Noy's guitar-toting brethren. Noy takes four of his own tunes—"Steroids," "Say What?!," "Epistrofunk" and "Twice In A While"—and breaks them down into easy-to-learn sections. Each riff, lick and line is explained in detail and picture-in-picture filming, used during certain, close-up sections, allows for guitarists to closely examine one hand, while also keeping the other in view.

Noy details the inspiration and structural identity surrounding each track, explaining how a Thelonious Monk composition like "Epistrophy" or a Miles Davis classic like "So What" can serve as the foundation for new music, and he references artists like singer James Brown, guitarist Jimi Hendrix and singer Al Green when discussing certain distinct aural characteristics of his work. Along the way, his actions touch on important topics, like the need to practice slowly while using a metronome, and he clearly practices what he preaches. He demonstrates each number with flair when he's at the plate and those working at home have an opportunity to play along with his killer band, featuring James Genus on bass, Rocky Bryant on drums and Jerry Z on keyboards, .

While Jazz Heaven had a lot of its bases covered from the outset, Noy's discs fill a void in the catalog and guitarists will likely find a lot of valuable information on these two discs. Guitar Improvisation Workout proves to be the more important of the two releases, as it speaks to a larger audience and touches on essential topics that connect directly to the art of improvisation, but both entries provide plenty of musical food for thought.