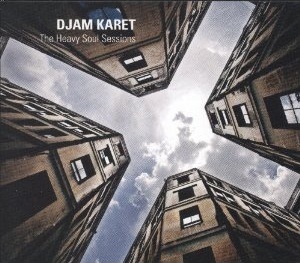 High expectations are always prevalent for astute followers of the inspiring and prolific Southern California-based progressive rock unit, Djam Karet. Indeed, they are among the elite within the genre. Going strong since 1984, the band surges forward with The Heavy Soul Session, recorded live in the studio sans compression techniques. Hence, the full-bodied sound heightens the band's overall impact.

With streaming guitars, multifarious synth phrasings and mind-numbing rhythmic structures, the program is balanced by a fluid modus operandi. It's an artful presentation, and features jazz elements to coincide with the guitarists' portentous crunch chords and resonant leads. And the musicians' synergistic output identifies a strong group-centric focus.

Djam Karet intersperses memorable melodies into its heavy aerial onslaught and often goes for the proverbial jugular via spirited climactic choruses and sweeping detours. At times, they profess a frenzied or mesmeric outlook but vary the mix with atmospheric treatments on "Consider Figure Three," which is a piece built on eerie motifs and drummer Chuck Oken, Jr.'s scientific-like oration. One of the many album highlights is the band's ode to prog-rock gods King Crimson on "Dedicated to K.C." Here, they engineer a vibe that triggers memories of vintage Crimson.

Djam Karet's penchant for exceeding expectations follows suit with this significant release. The program duly complements its impressive legacy and interminable pursuit of quality compositions amid the sterling musicianship.