John McLaughlin: The Heart of Things 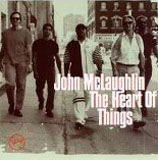 The Heart of Things allows John McLaughlin to surround himself with some young monsters. A strong line-up on this 1997 record includes McLaughlin alumni Jim Beard on keyboards and Dennis Chambers on drums, as well as electric bassist Matthew Garrison and saxophonist Gary Thomas. The youthful newcomers, Garrison and Thomas, front bands of their own and have their own musical ideas. They have integrated some of these concepts, offering solid support for The Heart of Things. Garrison supplies a strong foundation without being too busy and Thomas has that smooth, strong control which either indicates he is a consummate musician or that he doesn't take risks. The jury is still out on that one. Nonetheless, he plays a strong role in this music.

McLaughlin's writing and mixing of the album clearly reflect his desire for an ensemble feel. Solos appear here and there but none of them are extended. Some listeners may not care for this. Chambers' drumming, which has always had a tendency to overwhelm, is much more integrated as part of the whole. The drummer's force has become an issue in several of John's latest recordings and especially in concert. Chambers shows much more control on The Heart of Things and exhibits moments of subtlety.

McLaughlin's guitar tone has more of a bite than in many previous outings. This is very welcome. Still, despite his beautiful playing on this album, a more limited use of his ring-modulator would have been beneficial.

Listeners familiar with Jim Beard's appearances with Mahavishnu IV will no doubt recognize his layered synthesizer approach and appreciate it for what it is—a textural background for others to soar over. Beard does make a strong appearance on piano, and he and Gary Thomas open several tunes with themes that can best be described as "Spyro Gyra on Speed".

The opening tune starts rather lazily but the album as a whole has a "take no prisoners\" attitude. It is clear fusion. The best tune on the album , "Fallen Angels", is a sullen, slow dirge of joy and an ode to Coltrane. He's always being accused of just being a speed demon, but some of McLaughlin's best compositions have been slow pieces. Tunes in this vein that require listening are "Mila Repa" from Que Alegria and "The Translators" from Music Spoken Here.

"Mr. DC", the Dennis Chambers showpiece, is an excuse for a duel in concert. It is much more restrained on the album, but does feature quotes from McLaughlin's classic "The Dance of Maya."

On another highlight, "Healing Hands," McLaughlin brings out his old midi-guitar and lays down a big fat statement. This tune is also a direct descendant, if not a bastard child, of Belo Horizonte's "One Melody".

The Heart of Things ends on a solo acoustic note as McLaughlin revisits "When Love is Far Away" from his album Tokyo Live. Though the tune was unimpressive on that album, its treatment here is much more fulfilling.

The Heart of Things is the most exciting band John has had in some time and bodes well for the future of his music. This album catches the band at a moment in time but does not capture its spark in live performance.