By TROY DOSTERT
November 27, 2018
Sign in to view read count 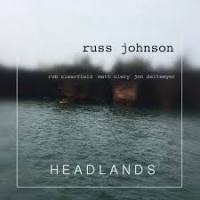 One thing's certain when you listen to a Russ Johnson record: you're going to hear music made with care and craft. Johnson is a discerning composer and trumpeter, and he has a special talent for producing thoughtful compositions that possess enough fluidity and creativity to remain fresh even after repeated encounters. He's also adept at drawing from the pool of the larger artistic community of which he's part. Back when he was a vital contributor to the New York scene, he teamed with folks like Mick Rossi, Kermit Driscoll, and Mark Ferber—the latter two having played on his excellent disc Save Big (Omnitone, 2004). But when he moved to Chicago in 2011, he could now join forces with guys like Tim Daisy, Jason Stein, and Anton Hatwich, all of whom appeared on Meeting Point (Relay, 2014). Now he's got a completely different lineup, although just as Windy City-based, for the Headlands Suite, a live release recorded at Chicago's Hungry Brain in 2017.

With keyboardist Rob Clearfield, bassist Matt Ulery and drummer Jon Deitemyer, Johnson has like- minded compatriots who share his sensibility in creating adventurous, multi-textured works that don't head so far out that they lose their tether to the jazz tradition. Headlands, a 12-movement suite Johnson composed on commission for the Hyde Park Jazz Festival, is an ideal realization of Johnson's approach, as it contains well-defined ideas with cohesiveness and focus, but the music is hardly confining, as all four musicians get plenty of room within the pieces' parameters to stretch out and explore their contours.

"Headlands" offers the somewhat noir-sounding theme that serves to open (and close) the suite, Ulery's slithering bass and Clearfield's shimmering keyboards insinuating what's to come rather than announcing it. But it doesn't take long for the quartet to catch fire, as the next track, "Serpent Kane" is a dynamo, especially with Clearfield's percussive flurries feeding off of Ulery's and Deitemyer's rhythmic momentum. Interspersed throughout the album are four solo segments, one for each musician, and these are seamlessly integrated into the pieces that surround them, so that the music really does have the continuous feel of a suite, rather than merely a collection of tunes. And they are measured, thoughtful solo statements: these guys aren't prone to wander aimlessly, instead preferring compact expressions that serve to support the larger suite.

As much as Johnson should receive kudos for his well-executed concept, the central appeal of the music is found in its musicianship, especially when the four double down and ratchet up the intensity. Ulery, Deitemyer and Clearfield aren't strangers to one another, having worked together on Ulery's Wake an Echo (Greenleaf Music, 2013) among other projects—and it shows, as each of the three can anticipate the others' moves and turn on a dime in response. "Mons Calpe" is a slow-boiling cooker that eventually releases some torrid power, derived in large part from Deitemyer's and Ulery's locked-in rapport, while "Isthmus" showcases the group's ability to generate grooves that are both rock-solid and capable of subtle adjustment at any moment—thus giving Johnson a stable yet pliable floor upon which to construct his own imaginative edifices. And his voice on the trumpet is a thing to behold, both feisty and lyrical, with enough edge to warrant the "avant-garde" label yet with a sensitivity that belies that facile tag.

This is a band that works really well together, and it's good news indeed that they'll be releasing a follow-up suite in 2019. Johnson's decision to take his talents to the Midwest continues to bear fruit, with even more to come.