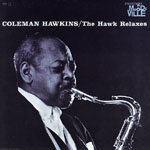 Coleman Hawkins had every right to rest on his laurels by the time of this 1961 recording. But The Hawk Relaxes finds the father of the tenor saxophone—aka Hawk or Bean—doing anything but clinging to his perch. He may no longer be soaring in search of prey but he's gliding on buoyant and vital air-streams, performing to near-perfection an all-ballad program that rewards the attentive listener at each turn.

When the history of the tenor saxophone was being written primarily by two artists—Hawkins and Lester Young—every tenor player either had memorized Hawkins' solo on the 1939 recording of "Body and Soul" or was carrying in his horn case a faithfully copied transcription. (Down Beat Magazine recently reported Bill Clinton as relating to Wynton Marsalis and a Jazz at Lincoln Center audience that of all the versions of the tune stored in his iPod, none approached the definitive version by Hawkins.)

Perhaps an unfortunate consequence of that seminal recording is that it's led to an almost exclusive emphasis on Hawkins as the prototypal "harmonic" or "vertical" player, and Lester Young as the exemplary "melodist" or "horizontal" music-maker. A useful distinction, but one that has frequently given rise to a view of Hawkins as little more than a creator of arpeggios based on a song's chord changes.

But there's more—considerably more. To begin with, his tone isn't simply "pretty." Nor is it burdened by heaviness and grease, breathiness and spit, exaggerated vibratos and gratuitous effects. It's a non- manufactured sound, as natural and spontaneous as it is virile, warm-hearted and bold. Even on ballads, the Hawk talks, dramatically punctuating the poetry with near-vocal articulations, especially as he moves up the register of the horn.

A rubato initial chorus of "When Day Is Done" begins in dark resignation before going to regular meter and rising to a memorable protest against the dying of the light. The sublimely sentimental "Under a Blanket of Blue" begins with cozy story-telling warmth before a double-time second chorus introduces playfulness under the covers. After Kenny Burrell plays the verse, Hawkins brings to "More Than You Know" all of the soulful drama of an angst-ridden Sinatra reading. Next, Hawkins' unaccompanied assertive tenor announces a surprise dance tonight before seductively sliding into the gently swinging strains of "Moonglow." "Just a Gigolo" becomes a memorable conversation between Hawk and Burrell, a performance comparing favorably with Sarah Vaughan's At Mr. Kelly's (EmArcy, 1957).

Besides Burrell, pianist Ronnell Bright, accompanist to "Sassy" throughout much of this period, is no less supportive of his tenor-legend than his singing-legend employer. Joe Goldberg, who wrote the original insightful liner notes, in his follow-up for this RVG edition unwittingly slights Al Cohn's masterful performance of "When Day Is Done," from Cohn on the Saxophone (Dawn, 1956), when he credits Hawkins with rediscovering the venerable tune. Finally, the All Music Guide must be cited for sinking to new lows in carelessness or tone-deafness for the dismissive review of this Hawkins treasure.

I'll Never Be the Same; When Day Is Done; Under a Blanket of Blue; More Than You Know; Moonglow; Just a Gigolo; Speak Low.