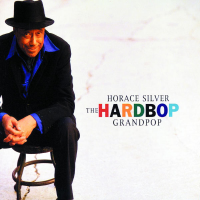 With musicians, and artists generally, there's a tendency to think the best work is the earliest.

It's usually true. Paul McCartney was never better than when he recorded with the Beatles. Chuck Berry's best work was the early hits like "Johnny B. Goode" and "Roll Over Beethoven." Tom Wolfe hasn't written anything as good as "The Right Stuff" and "The Electric Kool-Aid Acid Test."

So it is, too, with jazz musicians. Dizzy Gillespie's seminal work came in the 1940s and the birth of bebop. Chick Corea, while still solid and dependable, did his best work with Return to Forever.

There are exceptions, of course. Miles Davis constantly reinvented himself over a long period of years. Duke Ellington was a terrific composer and leader until the day he died.

And so, consider Horace Silver.

Early in my jazz education, I found a 2-CD set called A Night at Birdland. It was recorded in 1954 by a fabulous quintet led by Art Blakey. Horace Silver was the pianist, only 26 years old, and he wasn't even the best musician in the group, or even second-best, and maybe not even third-best. There was Blakey on drums, the sensational Clifford Brown on trumpet, and the underrated Lou Donaldson on sax.

This is the very definition of hard bop. It's a 5-star ensemble playing at the peak of its power. Every song is masterful. The ballads are tender and poignant. The bop is breakneck and invigorating. Every one of the musicians is at the top of his game. It's likely Blakely never recorded a better live set—and that's saying something. It's not a Horace Silver record, per se. Silver was still young and on the cusp of fame. But he's brilliant. If you buy just one Horace Silver CD, this would be my pick.

Horace Silver was 68 and past his prime. A critic tagged him "the hard bop grandpop." Silver liked the name so much, he used it as an album title. Following Blakey's lead, he surrounded himself with younger musicians, notably four horn players, including Michael Brecker. And he wrote ten new songs.

I won't pretend that The Hard bop Grandpop was the Jazz Messengers reincarnated. But it's very good. It's probably better than a 68-year-old has any right sounding. The mood is different. It's not hard bop exactly, despite the title. There's more soul. The brass really takes the forefront. Silver takes his solos, and they are very good, but he mostly lets the younger guys shine. (Though Silver wrote corny lyrics for half of the songs, he wisely decided against using a singer. The CD is entirely instrumental, though he included the lyrics in the liner notes, for anyone who wants to follow along.) It includes tributes to Coleman Hawkins and Dexter Gordon and even a tune based on a teapot whistle. All of it is wonderful and lyrical and soulful.

No, it's not vintage Silver. It's not as good as the Blakey/Jazz Messenger stuff. So maybe it's only 4-star CD. With legends in late-career, you adjust your palette. This is enjoyable music. It's not fair to compare Paul McCartney in 2007 to Paul McCartney in 1968. It's the same in jazz. Even so, sometimes a lion in winter is still a majestic thing.

I Want You; The Hippest Cat in Hollywood; Gratitude; Hawkin'; I Got the Blues in Santa Cruz; We've Got Silver at Six; The Hard Bop Grandpop; The Lady from Johannesburg; Serenade to a Teakettle; Diggin' on Dexter