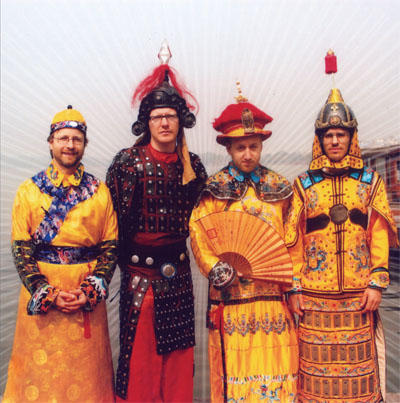 In celebration of its tenth anniversary, Swedish saxophonist Jonas Kullhammar's quartet drops an eight-disc set of live tracks and studio recordings. It traces the group's development as this energetic quartet comes to terms with a formidable musical legacy that includes everything from bebop virtuosity to New Thing exploration. The fact that their music is successful speaks to how well they have assimilated and transcended their history and that of the music they play.

The set is not presented in strict chronological order, nor should it be. The recording quality, superb throughout, allows full concentration to be on the playing. There are many tune duplications here, but similarity is never a problem as each reading is imbued with fresh vigor.

This reviewer had never heard a note from Kullhammar, only being familiar with his work through reputation. The plaudits awarded him are justified, as his sound is remarkably diverse. It might invoke the sharp angular solo exhortations typical of Coltrane's final period, as with the multiple versions of the hard bop scorcher "Bebopalulia". Conversely, Kullhammar can conjure simultaneous visions of Wayne Shorter and Cannonball Adderley as he slithers through the snaky melody of "Salut". He can scream and shout with Ayler, but his bent notes are a model of precision and emotive generosity, as with older-school practitioners. Dig into disc four's version of "Snake City East" to hear some perfectly executed slides and stabs, the blues-inflected melody a perfect vehicle for Kullhammar's grit.

The rest of the band matches Kullhammar's subtleties and intensity. Just listen to how he and drummer Jonas Holgersson match wits as they cruise through a rollickingly up-tempo version of "Horseface" from 2002. Here, Elvin Jones and Coltrane are referenced, but a certain coolness is also in evidence, updating the sound somewhat. The group functions as a well-oiled machine, handling all dynamic levels and speeds with finesse. Take "Ma Ran," a studio outtake from the Son of a Drummer sessions, where piano, drums and bass roar ascent as Kullhammar howls through a brief squall of near white noise. Contrast it with the gorgeous "For X," where space and luminosity inform each drum stroke and each atmospheric piano sonority. Especially noteworthy are Torbjorn Zetterberg's bass punctuations, which add pithy support to each gesture. He seems to know just the right notes and timing for each phrase he lays down as Kullhammar's introspective ebbs and flows waft smoothly over the band's solid foundation.

The box also allows us to trace the fluid group dynamic by comparing two versions of the same tune. "Oh my God/It's Blood" is represented by two renditions, both taped in 2004. Despite the modally ametric nature of the introduction, the version on Disc 5 has a sense of forward motion that Disc 3's reading does not. The latter still roils with intensity, but it starts and stops, while the former is pushed on, in large part, by Torbjorn Gulz' hectic piano runs and Hancock-influenced block chords as the others emote above.

On Disc 8, there are two dance mixes of the band favorite "Bebopalulia" and this is the set's only misstep. It isn't that they are bad, but they're not particularly novel either and one wonders why they were necessary at all. The tune lends itself well to the treatment, but more innovative measures could have been used to make the point. That said, the "Jonas Talking Bullshit" dialogue that ends the disc is a great chill-out after all the intensity. Kullhammar has a great sense of humor and can really work a room, tossing back one-liners to a particularly enthusiastic audience.

As for audience enthusiasm, it resonates on both the European and North American continents as the quartet plays festivals and club dates with equal energy and commitment. Minor quibbles aside, the group couldn't have given themselves a better birthday gift. As with the best sets, repeated tunes never become dull and the box is expertly programmed for maximum long-term interest. Hats off to the group for this fine compendium.