This could be embarrassing. She's obviously too old to be performing after all these years.

She seemed to come out of nowhere. In 1957, suddenly Dakota Staton's Late, Late Show album was even being played on the pop radio stations, as well as on the jazz stations. But she was clearly a jazz singer out of the Dinah Washington school. She had that natural swing built right into her voice, a wonderful feeling for the blues, and great spontaneous instincts when it came to interacting with her musicians.

When I heard she was appearing at the Village Vanguard, I dusted off my fake ID and headed downtown. It was a cloudy, late summer Sunday afternoon. I got there early and the place filled up fast . I sat at a table just a few feet from the bandstand and Ms. Staton was over in the corner booth near the miniature dressing room. She was having a scotch and milk on the rocks. Curious, I ordered the same and ended up letting the coffee-colored liquid congeal in the glass, wondering what the hell she liked about such an odd tasting drink.

Like her name, there was an expansiveness about Dakota Staton that filled a room. She was a big, curvy, sexy lady with a fluffed up hair-do and an outfit that was strictly "nightclub"—silvery white, low-cut and spangled. When it was gig time, the spotlight went on, the trio started to vamp, the star downed her drink and moved to a commanding position on the bandstand. Dakota Staton did not waste time with audience chit-chat. She jumped right into songs from her hit album, interspersed with some of her lesser-known favorites—"Mean to Me, "Broadway, "Moonray—and her unforgettable version of "My Funny Valentine that had everyone in the club swooning. She belted. She swung. She caressed the ballads. She invented new ways to phrase old lyrics. All with a voice that never wavered, never searched or strained for a note. Like the greats, she made singing seem natural and easy.

Through the years, I've often wondered why someone this talented never made it to the top, perhaps not quite up there with Ella or Sassy or Carmen, but certainly up there near the summit. She made a couple of more albums, but they never took off like her Late, Late Show side. I'd hear her on the radio from time to time, and remember what a strong, talented singer she was.

Forty years go by. Suddenly, I see an ad in the paper that Dakota Staton is playing at Skuller's in Boston. I have to go.

Skuller's is a medium-size jazz room in the Guest Quarters Hotel in Boston overlooking the Charles River. The room has a nice intimate sound. Not such great sightlines. I arrive early for the first set. There's a good crowd, and we're all milling around in the lobby waiting for the club doors to open. The lobby is one of those indoor airshafts that goes up about 20 stories and the hotel rooms face into the building, overlooking the lobby. About 20 minutes before show time, I look up and see a cloud of fluffy black hair floating along one of the exposed balcony/corridors that lead to the elevators. It is the exact same hair-do I remember from four decades ago that afternoon at the Vanguard. As I'm being herded into Sculler's with the rest of the audience, I see from the corner of my eye, a tall black woman in a spangly silver dress with a fluffy white feather boa. She's wearing these big, silver high heels and walking with little tiny baby steps into the stage entrance. From here she looks exactly the same as the first time I'd seen her except for the fact that she is wearing a pair of oversized, thick-lens sunglasses decorated with rhinestones. I worry for her as she teeters around a corner and disappears.

Moments later, the voice on the PA system announces: "Ms. Dakota StAAAAton. The trio starts vamping and from the back of the room comes the star, still walking like she's wearing shackles on her ankles. She reaches the edge of the bandstand, which is about a two-and-a-half-inch step, stops, removes her glasses and tucks them in her low-cut bodice, then unbuckles her shoes, takes them off, steps up onto the stand, and puts her shoes back on again. She teeters dangerously as she performs these gyrations. Her pianist watches her intently, slightly concerned. And I'm thinking: uh-oh. This could be embarrassing. She's obviously too old to be performing after all these years.

Set now in her two-point stance atop her stiletto heels, Ms. Staton looks up, acknowledges the audience with a broad smile, lifts her chin, opens her mouth and presto! Suddenly, any signs of age vanish from her face. And the voice, the very same identical voice I'd heard over forty years ago in the Village Vanguard, emerges, unchanged, strong and full of beautiful, lyrical energy.

I think she must have done almost the same set of tunes I'd heard her do the first time. But they still sounded amazingly fresh. The audience was a mixture of people like myself who knew Dakota Staton from her "Late, Late Show days and a generation who probably did not even know the reference to the early TV show alluded to in the album title.

It didn't matter. She killed 'em, leaving no corner of the room un-swung, un-rocked or un-caressed. The music came through her as it always had and as it evidently always will. Pure. Perfectly phrased. And ageless. 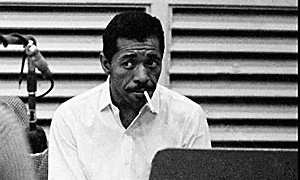 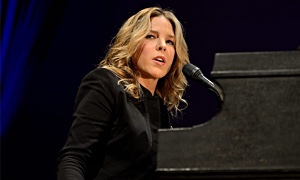 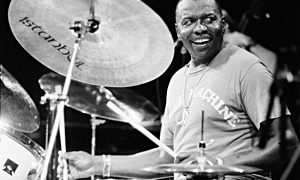