By DOUG COLLETTE
February 4, 2017
Sign in to view read count 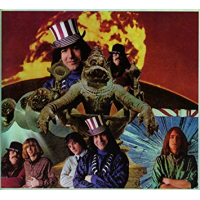 The Grateful Dead didn't always make the most astute business decisions through the course of their career, but the marketing/merchandising agreement reached in 2006 with Rhino Records has been a treasure trove for the label, the band and its fans. And notwithstanding accusations of cash-grabbing, the fact is packages such as Sunshine Daydream and Thirty Trips Around the Sun are as collector-friendly as they are commercially savvy.

A long-term series of reissues covering the Dead's studio and live albums is similarly conceived and, upon its launch, equally expertly executed. Instituted to release two-CD packages (in addition to vinyl picture discs thereof) on or around the fiftieth anniversary of the original release, the first studio work is included in remastered form along with a second disc of unreleased recordings, in the case of this debut, a live recording from July of 1966, one of the rare recordings from the group's first two year's in existence.

The Grateful Dead never spared expense for the sake of sonics (see 'The Wall of Sound'), so it's no surprise that, with the former title technically reworked by David Glasser since inclusion in the twelve-CD box set The Golden Road (1965—1973) (Grateful Dead/Rhino, 2001), it's enhanced depth and presence is comparable in its own way to the presentation of Owsley Stanley's recorded excerpts from the Vancouver Trips Festival appearance that represents one of the band's earliest forays from their home base in San Francisco. The group sounds more practiced on stage than in the studio, but that's understandable given the five day turnaround on the latter work (and, of course, the comparably more concentrated preparation the Grateful Dead devoted to live performance).

The Grateful Dead's collaboration with early The Rolling Stones' engineer Dave Hassinger as producer includes much of the same material and as the concert content and thereby documents inclusions to a repertoire that would endure for decades, even if not in these Farfisa-dominated arrangements. Far less prominent than that keyboard (or bluesy harp) work, Ron "Pigpen" McKernan's vocals, apart from "Big Boss Man" and "Good Morning Little Schoolgirl," are comparatively overshadowed, in turn, by guitarist Jerry Garcia on Bob Dylan's "It's All Over Now Baby Blue" as well as originals such as "Viola Lee Blues." Meanwhile rhythm guitarist Bob Weir, besides contributing lustily to group singing, relegates himself to covers such as "Beat It On Down the Line," a feature of Grateful Dead appearances clearly foreshadowing the future, as noted so discerningly in the essay in the accompanying booklet of this set.

It'd only stand to reason the author of Heads: A Biography of Psychedelic America (Da Capo, 2016, Jesse Jarnow, would do such an exemplary job annotating the back story behind both the studio and live material. But to his great credit, he does so without betraying an unduly academic tone, while the informative way he shares enlightening detail about the Grateful Dead in ways large (their long-term cultural impact) and small (along with the rarely-played "Standing On The Corner," and "You Don't Have To Ask Me," "Cardboard Cowboy" as a solo composition of bassist Phil Lesh's) is all the more welcome and accessible for his passion. Plus which, he exhibits a wry sense of humor not all that dissimilar to that whimsical sort his subject exhibits.

The packaging of The Grateful Dead: 50th Anniversary Deluxe Edition matches the scholarship and sonic superiority it encloses. The color scheme of the initial design is expanded for the sake of the digi-pak, while the surrounding slipcase featuring the cover art has a quasi-3D metallic patina that's symbolic not just of the kaleidoscopic vision of the Grateful Dead, but the expansive impact on contemporary culture that would ensue from the point of demarcation this title represents.