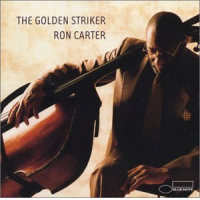 Most renowned—and in some ways unfairly so—for his tenure with the famed Miles Davis Quintet, Ron Carter has remained a renowned figure of jazz for so long that it is difficult to imagine a jazz fan who could be wholly unaware of his contributions to the evolution of the upright bass, as well as jazz music’s development as a whole. Considering his stature as premier bass instrumentalist, composer, and bandleader – with an output of over 2,000 albums! – it becomes difficult to imagine what Carter could lay down on The Golden Striker which he has not explored before. Carter quickly reveals, however, just why he is consistently hailed as a master artisan.

An indefatigable experimenter, Carter belongs to that almost mythic Blanton-LaFaro-Brown lineage of bass innovators whose combined efforts are seen to have "freed" the bass from its more traditional role of timekeeper and harmonic ballast. As always, historical analysis reveals the limits of such heraldic opinions, assertions more often made by interpreters than practionars. Close listening will reveal numerous precedents to all great inventions in the same way a more overarching examination of trends will reveal these brilliant players for what they were: dedicated instrumentalists and supreme artisans capable of achieving what few even attempt, the popularizing, consolidation, and reflection of their musical past, present and future.

Neither extravagantly experimental nor conservative, The Golden Striker presents a befittingly mature, somewhat brooding collection of tunes. Working within a guitar trio format with pianist Mulgrew Miller and guitarist Russell Malone, Carter offers nine tracks which include four of his own compositions, as well as one each by his band-mates.

In order to emulate a "club" atmosphere, Carter, Miller and Malone recorded with little rehearsal, and with two exceptions layed down each tune on first takes. Executed with a refined attention to detail, the album as a whole presents solid musicianship and the blending of three well-matched yet distinct voices. Malone’s guitar sings soft, astute lines that play gracefully against Carter’s resonate, warm bass and Miller’s often almost classically melodic approach. With the unfortunate exception of missteps, "The Golden Striker" and "A Quick Sketch," all the album’s selections offer subtle readings of quite difficult arrangements.

The group reaches its greatest level of cohesion on "Concierto De Aranjuez." Due in large part to Malone’s firm yet plaintively articulate presentation, "Concierto De Aranjuez" establishes such an eloquent atmosphere that an entire narrative seems to reveal itself as the three players develop the pieces inherently lamenting melody. Carter’s solo paints such a clear picture entire narrative visions arise, while one can almost taste the tequila remorse of betrayal, wrongful love and pointless affliction hidden within Mulgrew’s light touch and Malone’s wistful lines.

At no point brash, the music presented here may not approach the heights of invention Carter has previously attained, but then again, perhaps it shouldn’t. At their best, Carter, Mulgrew, and Malone (particularly Malone, it must be said) offer the penetrating insight of experience which instead of reveling in the raw extravagance of break-through, savors the poignant minutia of being that constitutes the progress of our lives.

Despite the disappointment of several lesser pieces, the album’s successes indicate a potential to establish an extraordinary working group. Hopefully Mulgrew, Malone and Carter will work together again soon, as it would be extremely interesting to discover what a more consistent working relationship would produce.