By MARK SULLIVAN
August 2, 2019
Sign in to view read count 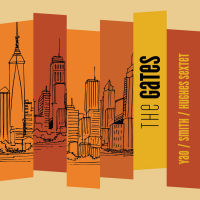 More water from the seemingly inexhaustible Detroit hard bop well. Saxophonist James Hughes and trumpeter Jimmy Smith are known for their own The James Hughes - Jimmy Smith Quintet, as heard on Motion (Self Produced, 2018) and Ever Up & Onward (Self Produced, 2016)—two red-hot recordings in that tradition. Here they are joined by co-leader John Yao on trombone, and a different rhythm section—pianist Corey Kendrick , bassist Jeff Pedraz and drummer Nick Collins. The program is all original compositions by the three co-leaders.

Smith's "I-75 @ 5" opens the set (the title refers to rush hour on a major Detroit-area highway) with a surprisingly fast-moving modal theme, given the subject. His trumpet solo leads, followed by Hughes on alto saxophone and Yao's trombone. "Hell Gate" is a shuffle from Yao's pen which features a bit of three-way conversation among the horns (in the midst of a tight, long-note theme). Yao takes an extended solo, followed by Pedraz on the double bass, accompanied by only the rhythm section.

The title tune (Smith's other contribution) is a sprightly bossa nova which again highlights the excellent blend of the front line. After three strong solos (tenor saxophone this time), the horns engage in another bout of simultaneous blowing for the fade out. "Ice On Snow" (this is the Midwest, after all) is a jazz waltz from Hughes. The head leads into a graceful piano solo from Kendrick. "Sophia's Song" is the ballad of the set, from Hughes' pen and featuring his tenor saxophone in the lead. Another beautiful solo turn from the piano as well.

Yao's "At Peace" has especially expansive horn writing, with solo voices emerging and then rejoining the ensemble. Pedraz takes the first solo playing arco, which makes a seamless transition from the horns. "Dog Days" completes the album with a traditional up-tempo feel. Drummer Nick Collins gets a bit of the spotlight driving the ending home, a compliment to his fine, restrained accompaniment throughout the set. The entire project demonstrates the continuing power of hard bop when played with energy and focus. These players make it sound fresh and new.