The Gaslight Anthem at The Paramount 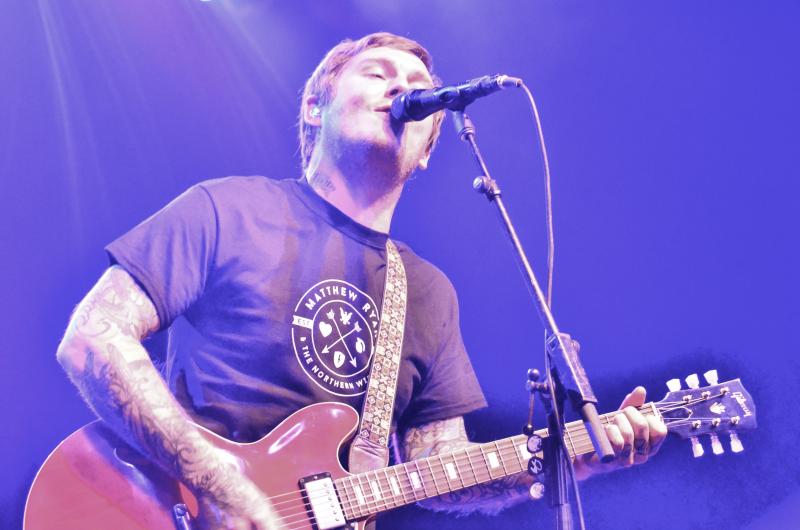 New Jersey's newest favorite sons rocked a sold-out, packed-to-the-gills Paramount on a steamy Tuesday evening in late July. It was blistering hot outside and the Gaslight Anthem's burning performance insured that it was just as hot inside the Huntington, NY rock 'n' roll mecca. The energy was high, the walls were sweating and the audience was bopping, clapping and singing along with singer/guitarist Brian Fallon from the first notes of "Handwritten" through to the last chord and cymbal crash of the band's closing number, a rousing cover of the Who's "Baba O'Riley."

The New Brunswick, NJ band came together in 2006. A four-piece, consisting of Fallon, drummer Benny Horowitz and two members named Alex (Rosamilia on guitar and bassist Levine), the Gaslight Anthem caught its big break in 2007 when its debut CD Sink or Swim was released on XOXO Records. 2008 was greeted with the release of the Señor and the Queen EP (Sabot Productions). The band's buzz got louder with the release of The '59 Sound (SideOneDummy Records, 2008). American Slang (SideOneDummy Records), released in June 2010, gave Fallon and his crew even more exposure, selling over 26,000 copies in its first week of release while debuting at number 18 on the Billboard charts. Its follow-up Handwritten, was released in 2012 on Mercury Records. Buoyed by the single "45," the album debuted at number 3 on the Billboard charts (selling 40,000 copies during its first week of release). Island Records released the band's fifth full-length studio album, Get Hurt, in 2014.

The Gaslight Anthem's sound is a mix of garage band rock, Americana, a touch of melodic punk as well as a pinch Motown and soul with more than just a slight nod to Bruce Springsteen (Fallon claims that "The Boss" was a major influence) and the Jersey Shore sound. On this night on Long Island, all were very much in evidence. The multi-generational audience was greeted with a tight opening volley that included "Handwritten," "High Lonesome" (from < em>The '59 Sound, "Biloxi Parish," "I'da Called You Woody, Joe" (with its "Stand By Me" intro), "45" and a slowed down version of "Boxer."

The band really began to show off its chops and influences with the hard-rocking cover of the Tom Petty & the Heartbreakers classic, "Refugee." During the evening, the Gaslight Anthem played songs from every facet of its career as well as the covers of Southside Johnny & the Asbury Jukes (a harder-rockin' sped-up, then slowed down and finally sped-up again version of the Jersey Shore stalwarts "Havin' A Party"), a quick false start (three tries) version of Blue Oyster Cult's "Don't Fear The Reaper" during which Fallon egged the audience-on when he said, "I got a fever," and the crowd responded with, "More cowbell!") and Robert Bradley's "Once Upon A Time." Other highlights included "1930" from Sink Or Swim, "Say I Won't (Recognize)" "1,000 Years" from Get Hurt and "Señor and the Queen." Though there wasn't an official encore (Fallon stated, "We've stopped doing the encore thing because without it you can fit in more songs."), the band closed with "Howl," "American Slang," "The '59 Sound" (the song that first brought the band to the attention of many of its fervent fans) and "Baba O'Riley."

During the nearly two-hour performance, Fallon (who was wearing a t-shirt paying homage to opening act, Matthew Ryan) was in excellent voice. The show was also highlighted by Rosamilia's stunning fretwork which led the way, allowing Fallon's rhythm guitar to blend in smoothly with his vocals while Levine and Horowitz provided a tight, spot-on, in-the-pocket rhythm section. The band's songs about love, hurt, coming of age and the struggle (as well as the redemption) that comes with each obviously touched something within the hearts and souls of the audience members. As they were leaving the venue, many were seen on the street smiling, joking and commenting on the fantastic performance. Others were walking together, harmonizing (albeit a bit off-key) and singing sections of the band's most famous songs—"American Slang," "45" and "The 59 Sound."

About The Gaslight Anthem