By MATTHEW WARNOCK
September 6, 2009
Sign in to view read count 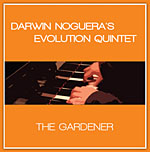 The Gardener is an expressive and experimental take on the Latin jazz vernacular by talented, Chicago-based pianist Darwin Noguera. With his tongue-in-cheek Evolution Quartet, Noguera is not only referencing the famed father of modern evolutionary theory, with whom he shares a name, he is also referring to the evolutionary nature of his music. The music here represents a new branch on the tree of jazz; Noguera's music grows out of a strong understanding of what has come before, while creating a new branch on the musical evolutionary chain. This new approach to the genre produces compositions and improvisations that are as enjoyable to hear as they are refreshing in nature.

There is a strong dichotomy of old and new thread throughout The Gardener. There are tunes that are firmly based in the Latin jazz tradition, such as "Aguas Quietas," penned and featuring harmonica virtuoso Howard Levy. The tune features the seldom heard son nica rhythm, as well as a memorable improvisation by Levy and strong rhythmic support by Noguera and percussionist Juan Daniel Pastor.

The other side of the musical dichotomy can be heard on the albums opening track "Señor Del Pozo." The tune's intro features rhythmic and melodic dissonances before settling down into the main groove of the tune. The tune then alternates between sections of traditional Latin and modern jazz grooves, with some very hip and modern horn voicings thrown in for good measure. The constant push and pull between new and old prevents the album from becoming redundant. There is always a new harmonic, melodic or rhythmic twist waiting around each corner.

As well as being a talented composer, arranger and bandleader, Noguera is an accomplished performer, a talent that he showcases on many occasions throughout the album. One of the best examples comes during his solo performance of "Piano Prelude." Here, Noguera brings a sense of melody, phrasing and emotion to the piece that would only be expected from a performer many years his senior. Noguera can also lay it down when the moment is right. His solo on the album's opening track is a hard-driving, excursion into the modern jazz vernacular that showcases the diverse nature of this up-and-coming composer/performer.

The Gardener is a very strong outing for Noguera and his entire ensemble—a bold and refreshing look at the Latin jazz genre from an artist who will, no doubt, continue on his musical evolution for many years to come.