By ELLIOTT SIMON
February 8, 2004
Sign in to view read count 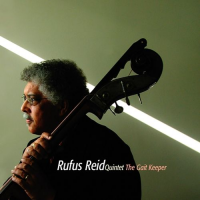 For over 20 years, bassist Rufus Reid has deftly balanced the roles of educator and performer. In the process, he has become one of the top post bop session players in the world and been the "gatekeeper" for a notable flow of new talent, guiding such leading young bassists as Duncan Hopkins, Rick McLaughlin, Nicki Parrott and Doug Weiss. Recently Reid attended the acclaimed Jazz Composer's Workshop, where he further explored his compositional talents. Featuring a selection of these newly composed works within the context of his handpicked intergenerational group, The Gait Keeper opens a new passage into Reid's evolving musical persona.

Always the master mentor, Reid has made certain that a tight quintet is on hand to interpret his original compositions. The soulful "You Make Me Smile" features Rich Perry's full tenor tone and the tasteful trumpet vibrato of Reid student Fred Hendrix. It previously appeared on Reid's 1984 offering Seven Minds , whose title cut is also reprised here with a classical arco intro that pays homage to its composer, bassist/cellist Sam Jones. John Stetch's piano stands out on both "Ode to Ray," a tribute to Reid's own mentor, bassist Ray Brown, and the capricious "Whims of the Bluebird." His piano solos offer a clear, but ever inventive direction, and his playing effectively converses with both saxophone and trumpet to create a discourse between rhythm and melody.

The complex title piece has drummer Montez Coleman at the helm as the ensemble jointly navigates through its distinct compositional divisions. With a highly tuned knowledge of his instrument, Reid accesses its full range, never neglecting the upper octaves as he perfectly complements Perry and Hendrix. His solo on "The Meddler" allows the bass to reach its full potential with an intricate melodic line rooted within the greater rhythmic contour. Reid assures that everyone is in step on the suitably titled Gait Keeper.