By GLENN ASTARITA
August 2, 2007
Sign in to view read count 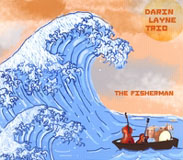 The first half of The Fisherman, by Austin, Texas-based guitarist Darin Layne, is steeped in laid-back folksy jazz-like articulations, awash with wistful lines and quaint melodies. Layne's rhythm section is firmly nestled in-the-pocket to complement his deft and angular phrasings. On "See Five, the guitarist executes dreamy lines and ascending choruses amid his artful use of volume control techniques. Echoes of vintage Pat Metheny come to mind here, but he goes for the slam dunk during the second part of this session, dissecting the blues, cranking his sound up and varying the overall pitch on the upbeat "K.B.

Layne's meticulously crafted progressions convey sensitivity to the inherent frameworks of his comps. But he soars into the red zone during "Whippit, as he employees a wah-wah pedal with fuzz-toned distortion. Elsewhere he solos atop buoyant funk grooves, letting it rip on "Break Me. Nonetheless, it's a nicely-balanced set from an artist who knows how and when to pick his spots. And it's easy to discern why his work has been featured on TV and in film. In sum, Layne shrewdly melds chops and poise with a sophisticated approach, all firmed-up by the rhythm section's compassionate support.