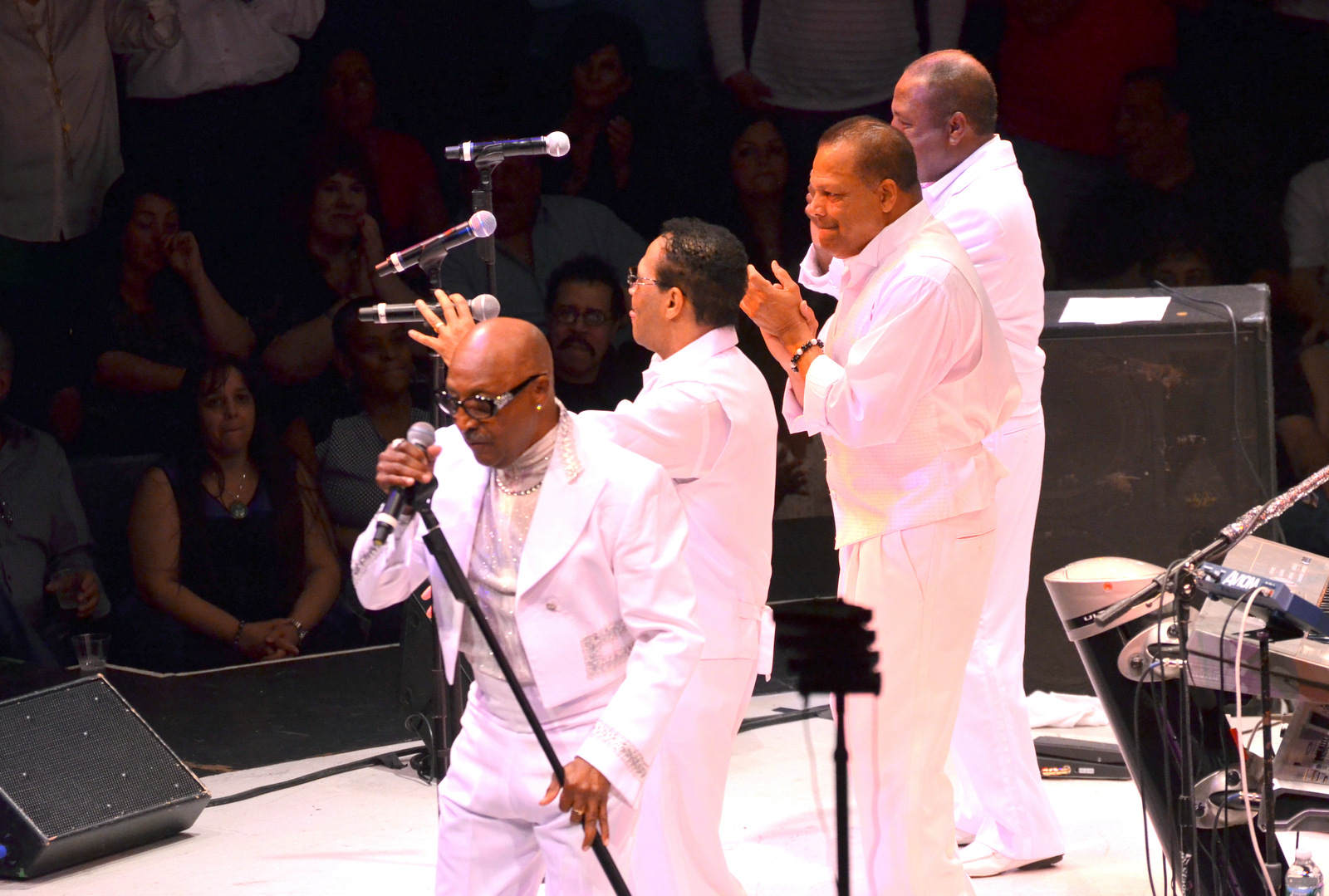 By MIKE PERCIACCANTE
June 14, 2014
Sign in to view read count

Disco was alive, well and flourishing in the small Westbury concert venue on this late May evening. The Bell Bottom Ball... the name of the event itself should conjure memories of Saturday Night Fever, John Travolta, platform shoes, 2001 Odyssey in Brooklyn, big hair, Dance Fever, polyester, Studio 54 and disco balls. And, with the exception of an on-site, in-person appearance by John Travolta, elements of each were on display. Hosted by Deney Terrio, the former host of Dance Fever (who also is the man who taught John Travolta to dance) along with CBS-FM disc jockey, Brooklyn's own Joe Causi, the evening's festivities included attendees dressed as if it were 1977 and they were heading out to that era's hottest dance clubs.

The middle-aged audience clearly was reveling in the music and reliving days gone by as the Disco Unlimited tribute to Donna Summer opened the evening. The sheer joy expressed by the crowd increased exponentially as each subsequent act was introduced. After the tribute band's workmanlike performance, Terrio and Causi walked, mics in hand, down the center aisle from the back of the venue toward the stage. After some banter, during which Causi reminisced and carried on, Lime took the stage. The stage began to rotate (for the uninitiated the stage at the NYCB Theatre is located in the center of the venue; many concerts are performed in the "full round" and feature a revolving stage). The duo got the audience pumped and in the mood as they performed "Babe, We're Gonna Love Tonight," "Angel Eyes," "Unexpected Lovers" and "Your Love."

Causi and Terrio, who introduced each and every band, again took over center stage. They introduced Bonnie Pointer. Ideally, it was at this point that the evening began to take off. In essence, her set was the beginning of the "hits" portion of the show. Pointer looked fabulous as she danced, juked and shimmied her way across the stage. Her energetic set featured "Heaven Must Have Sent You" and "I'm So Excited" (which she originally released along with her sisters Anita and June as a the Pointer Sisters single).

Harold Melvin's Blue Notes were up next. Upon first blush, this Philly soul vocal group might seem a bit out of step with the other disco-flavored groups participating in this tour. This could be especially true because Melvin passed away in 1997. However, the remaining members, the Blue Notes, reunited in 2013 and continue to perform today. The group's members were in particularly good voice and the performances of "Your Love Is The Only Love I Know, "Don't Leave Me This Way," "Bad Luck" And "The Love I Lost" were stellar and of the era. Though not particularly a disco group, these songs fit in so well with the evening's theme that without the Blue Notes' performance, a huge hole would have been left in the show.

The Trammps were then brought on stage. The four man group was resplendent in their white suits. The audience greeted them as if they were long lost friends, jumping to their feet and dancing to "That's Where The Happy People Go," "Hold Back The Night," the homage to the great blackout of 1977, "The Night The Lights Went Out," and the group's biggest hit "Disco inferno."

Prior to introducing Tavares, Causi and Terrio again commandeered the stage. This time they brought friends as Brian Rosenberg and the show's promoters were introduced. Rosenberg then ambled on stage with another surprise guest. The crowd went nuts when former 92.3 WKTU drive-time disk jockey Paco was introduced. Paco bantered with Causi about their tenure at WKTU, which at the height of the disco craze was the #1 rated station in the #1 market in the country (New York).

Every member of Tavares appeared to be in fantastic shape. The members of the group were clearly in total command of the stage, playing to all sides as the sphere slowly rotated. They worked the crowd into a dancing, screaming and shrieking fever pitch as the hits just kept coming: "It Only Takes A Minute," "Whodunit," "Don't Take Away The Music," "More Than A Woman" And "Heaven Must Be Missing An Angel."

Teen disco sensation France Joli is now just entering her fifties. Causi reminisced about how his program director at WKTU ran into his studio, handed him a 12-inch remix version of the latest Joli single and ordered him to play it immediately. Causi said that as soon as it hit the airways, the station's "switchboard lit-up like a Christmas tree" with fans asking for it to be played over and over. The years have been kind to Joli's golden voice. As she belted out her three disco anthems ("Feel Like Dancing," "Heart To Break The Heart" And "Gonna Get Over You") to the enthusiastic audience. Disco Unlimited was brought back on stage to back Joli on her biggest hit "Come To Me" and virtually every woman in the crowd could be seen singing along—some were even pantomiming and acting out the verses.

As the evening came to a close and its participants (both performers and concert-goers) were transported back to the present, they all seemed happy that they had the opportunity to return to that simpler time when (to them) all they really needed was some good friends, some good music and a beat that they could dance to. On this evening they had just that.