By JOHN BRICKER
September 24, 2018
Sign in to view read count 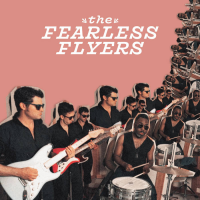 The Fearless Flyers' self-titled debut EP, released on March 23, is a brief but rewarding collection of funk jams performed with impeccable chemistry.

The Fearless Flyers are a quartet of some of the United States' grooviest virtuosos including Joe Dart on bass, Nate Smith on drums, and Cory Wong and Mark Lettieri on guitars. Most of the group are members of Jack Stratton's funk band Vulfpeck, excluding Lettieri, who plays for the Grammy- winning jazz fusion ensemble Snarky Puppy.

The EP kicks off with "Ace of Aces," an intensely groovy and instantly unforgettable monster with simplistic drums, slap bass, and short, smooth licks weaving between relentless rhythm guitar. In barely two minutes, all of the Flyers have shining moments, from Smith's tight fills to Dart's expressive, speedy basswork in the track's climax. "Ace of Aces" is easily the most fun song on the EP, and a perfect introduction to The Fearless Flyers' sound.

"Barbara" opens with a laid back, idiosyncratic drum groove reinforced by layers of lead guitar and bass playing the same punchy, ascending lick. Smith's strongest drumming on the EP appears here, as the simple guitars and bass give him plenty of room to display his constantly-shifting, deft touch. Despite its slow and stripped-back nature, "Barbara" is one of The Fearless Flyers' most complete songs.

Along with the Flyers' original works, the EP includes a few covers, transforming familiar tunes to fit their funky style.

"Under the Sea / Flyers Drive," a reimagined musical number from Disney's "The Little Mermaid," replaces the original's steel drums with rhythm guitars and switches vocals out for a lead guitar performance with heavy bending and sliding. At the halfway mark, the band abandons "Under the Sea" and builds on one chord, adding more and more animated instrumentation before abruptly ending the jam at its zenith. Although this track is not as memorable as original compositions like "Ace of Aces," it preserves the original's carefree mood while remaining detailed and satisfying.

The Fearless Flyers also cover Stevie Wonder's "Signed, Sealed, Delivered (I'm Yours)," transforming the soul track into the Flyer's most bluesy cut. Over the Flyers' rapid rhythm guitar and slap bass, guest guitarist Blake Mills delivers the original track's main melody with crunchy licks and savagely expressive solos. This blues fusion proves that The Fearless Flyers have the chops to blend genres, even if they choose to create mostly similar funk songs.

Despite the undeniable quality of the EP's six tracks, it feels incomplete without more stylistic variety. Their songs are consistently great, but The Fearless Flyers does not come together as a cohesive project.

Still, if you want 15 minutes of some great, groovy music, The Fearless Flyers have you covered.

About The Fearless Flyers