The Eybler Quartet: The New Guard

By C. MICHAEL BAILEY
May 28, 2011
Sign in to view read count
Joseph Leopold Edler von Eybler (1765-1846) was a friend of Mozart (1756-1791). The two composers met through a third, Franz Joseph Haydn (1732-1809) (some circle of friends that must have been!) Eybler was notable for having been asked by Constanze Mozart after Mozart's death in 1791 to complete the composer's unfinished Requiem. Eybler gave it the old college try, but ultimately abandoned the project, allegedly out of respect for Mozart and his gift, leaving the job ultimately to Franz Xavier Sussmayr (1766-1803), who used heavily what Eybler had composed for the project.

Musically, Eybler is largely remembered for his sacred music, chamber string music and a clarinet concerto. Regarding the latter, Eybler, Mozart and Sussmayr were all accomplished clarinet composers among a very talented late 18th century group devoted to the then evolving instrument. For the present consideration, the clarinet is of central focus in the second of these two recordings, both made by the relatively young, though well-studied Eybler Quartet, named in honor of the composer and dedicated to the Classical music developed by Haydn, perfected by Mozart and laid waste by Beethoven.

The Eybler Quartet was founded in 2004 by members of the Toronto-based Tafelmusik Baroque Orchestra: violinists Julia Wedman and Aisslinn Nosky, violist Patrick G. Gordon and cellist Margaret Gay. Wedman and Nosky are also members of the Kirkby Quartet and the Baroque ensemble, I Furiosi, whose recordings, Defiled Is My (Middle) Name (Self Produced, 2005) and Crazy (Sono Limnus, 2008) were well received, as was Wedman's Biber Mystery Sonatas (Sono Limnus, 2011). 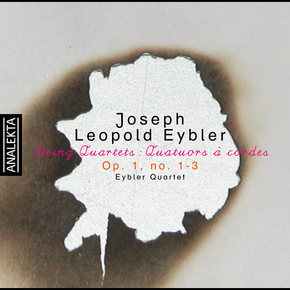 Not a total surprise, the Eybler Quartet's debut recording is of Eybler's String Quartets, Op. 1, nos. 1-3. What is a surprise is that this is the premiere recording of these quartets. Eybler composed nine formal quartets and one set of variations for string quartet. This is a modest output when compared to Haydn's 68, Mozart's 23 and Beethoven's 16 string quartets. But ten is a manageable number and, as fine as this recording is, a complete set of Eybler Quartets would he appreciated.

Eybler proves a more than capable string quartet composer who sounds more daring than Haydn but lacking Mozart's refined perfection. The C minor quartet begins with a darkly promising Allegro that retains its center of gravity in the concluding Finale Allegro movement. The D major quartet, while in a bright key, is shaded in its opening Adagio non molto/Allegro moderato that resolves into an urban dance. The Menuetto extends this dance motif, which is stretched as the Adagio cantabile is performed. The final Thema is most Haydn-like in personality, wrapping the quartet as if a bow.

The B-flat major Quartet is the most pastoral of the compositions and the most rigorously "classical." Its restrained brightness is polite. The Adagio is of requiem quality: thoughtful and intentional. The closing Finale Vivance is equally well-behaved with the rest of the quartet, conservative, never coloring outside the lines. Eybler sounds like a bridge between Haydn to Mozart. What better place is there to be? 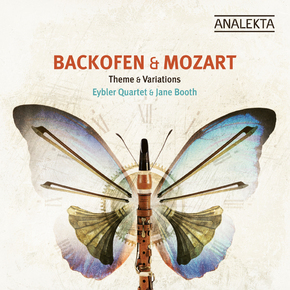 Among all of the period's composers for clarinet, Mozart is the most well considered with his late compositions, Clarinet Concerto in A Major, K622, and Quintet in A Major for Bassett Clarinet, K581, both composed for Anton Stadler, who favored the bassett clarinet and its lower range. It is this quintet that closes the second Eybler Quartet offering, with Jane Booth playing the basset clarinet.

Similar in character and structure to the Clarinet Concerto, the Quintet is a model of Mozartian efficiency and emotion. Booth's tone is creamy without being effusive. Modulation is supreme, melding with the top-notch support of the quartet. Mozart could conceive a peerless sweetness in his slow movements, with the Quintet's Larghetto being a superb example. Booth finds that special place where an ailing Mozart took place in his composing in the last two years of his life. Predating his concerto by two years, Mozart was finding that same place Beethoven would be a generation later.

Featured first on this disc are two pieces by Johann Georg Heinrich Backofen, a contemporary of both Eybler and Mozart and part of their clarinet mafia, himself a virtuoso on clarinet and basset horn. His Quintet in F Major for Basset Horn and Strings offers an illustrative contrast between the clarinet, basset clarinet and basset horn. It has a lower, richer, dark chocolate tone: more romantic and plaintive. Booth has no trouble navigating the instrument which proves one with Patrick Jordan's viola.