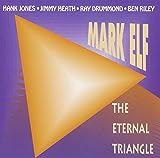 The title opener is a mellow cascade into a be-boppy bay where the water's fine and everyone's in the pool. Though Elf does take a solo, it is playful and pleasant and breaks the piece nicely. And it is also not the only spotlight segment of the song. In fact, pretty much everybody gets an individual shot at the listener. Though Elf is featured a bit more on the mellow "This is All I Ask," and though Heath shares the spotlight on the intro and close of "So Samba", solos again abound in this piece and all are back in together on the appropriately-titled jumper "Hot House".

Not only can Elf flex as a player, he also takes a turn at the composer's bench on two pieces. Sandwiched between Ellington's "Prelude to a Kiss" and Kern's "Why Do I Love You?", Elf's "Tea Cup" and the perhaps more appropriately-titled toe-tapper "The Elf" hold their own respectably, showcasing Mr. Elf's talents on both sides of the sheet music.