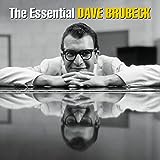 Dave Brubeck represents a generation of hard-working adults who followed World War II with ambition and success. At a time when retraining and advanced schooling helped millions to launch new careers, the pianist was adjusting to a new form of jazz. As the Modern Jazz Quartet formed its own distinctive air, Brubeck was coupling classical sounds with his interpretation of the bebop surprise. The late fifties and early sixties proved most fruitful for his vision. From that period come timeless recordings that remain etched in the memory of every devout jazz collector.

Much of The Essential Dave Brubeck comes from that vital period. They’re the songs we can never forget: 7/8, 5/4, waltzes, blues, ballads, and bossa novas. The results are both intellectual and swinging.

When Brubeck steps out on a local college campus, in a packed concer auditorium, or to some distant land, he carries more than a mere night’s entertainment with him. As an ambassador of modern jazz, he’s a prizewinner.

And the adventure continues. His July 10, 2002 recording of “Love For Sale” closes out this two- volume compilation. Bobby Militello, Michael Moore and Randy Jones swing the standard with technical prowess. All the elements are there: creative improvisation from the fluid saxophonist, a lyrical bass solo that captures your ear, subdued brushwork to belie the song’s history, and a fiery piano improv unlike any other.

There’s a lot more. A personal favorite, “Recuerdo” with Gerry Mulligan, moves deftly in 6/8 along an exotic trail that one would wish had never ended.

More than half of The Essential Dave Brubeck features the leader’s stellar quartets, most with Paul Desmond, Eugene Wright and Joe Morello. Each one is a classic.