The English Beat at The Stephen Talkhouse 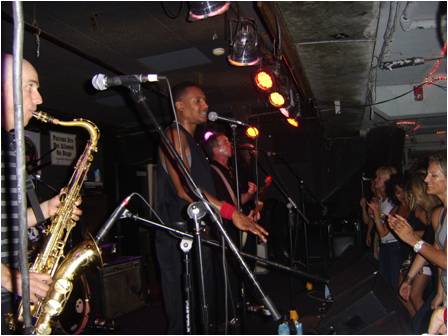 Though the band that rolled into Amagansett, New York's Stephen Talkhouse on this hot, humid and sweltering Friday evening was a reconstituted version featuring only one original member (Dave Wakeling), the group sent the crowd into a frenzy from the very start as it offered up its signature mix of punky Ska, new wave, pop, dub, rock, soul, funk, Motown, dancehall—and, of course, reggae.

The band—which according to its website, featured bassist Wayne Lothian; toaster Antonee First Class; Rhythmm Epkins on drums; Matt Morrish on sax; and keyboardist Ray Jacildo—provided the soundtrack to the "Punky Reggae Ska Summer Dance Party—Eastern Long Island Chapter." From the first notes of "Tears Of A Clown," the standing-room-only mid-forties to early-fifties crowd was reliving their youth by dancing and sweating to the band's bright eighties sound. The crowd continued to buzz as Wakeling and Toaster Antonee First Class interacted with the adoring crowd. Some of the biggest cheers of the evening were elicited by Antonee's give-and-take/call and response chant, "When I say English, you say Beat!"

Wakeling and the band had the audience eating out of their hands as upon hearing the first notes of virtually every song the audience responded with screams of recognition and applause. The crowd grew more and more frenzied as "Hands Off, She's Mine," "I Confess," "Twist And Crawl," "Can't Get Used to Losing You," "Save It For Later," "Stand Down Margaret," "I'll Take You There," General Public's "Tenderness" and "Mirror In The Bathroom" all made their respective appearances.

With the maniacally joyous fans skanking and dancing to the beat and donning various versions of 2-Tone Ska's official black and white color palette uniform, old and new English Beat T-shirts, quite a few '80s get-ups as well as a few who were dressed in rude boy outfits (that most likely hadn't seen the light of day since the very early '90s), it was evident that The English Beat—one of the 1980s' leading proponents of Ska's second wave—and its music had not only aged gracefully, but retained the strong melodies, dance riffs and slight jam band rhythms that made it famous in the first place.