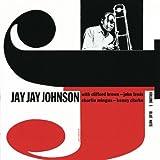 Compared with the first appearance of previously released jazz albums in CD format, the second generation of jazz CD reissues represents sophisticated product: 24 bit remastering, updated liner notes, and glossy packaging—candy for jazz lovers. One in the most recent block of titles from Blue Note’s Rudy Van Gelder (RVG) edition reissue series, The Eminent J.J. Johnson, Volume One plays a variation on the reissue theme. Blue Note originally issued the songs on this session piecemeal as two separate albums. This disc presents for the first time in its entirety the 1953 session that comprises the original albums.

The set consists of six master takes and three alternates—standards except for Johnson’s original, “Turnpike”, and pianist John Lewis’ contribution, “Sketch 1”. All the songs follow a straight-ahead arrangement: head on, solos, head off. Typical of early-fifties jazz recordings, play times hover in the slightly over three minute to under five minute range. These brief times preclude the all-star line up of Johnson, Brownie and Jimmy Heath from really stretching out. The musicians’ short solos tantalize the ears and leave one craving extra choruses of high-octane improv.

Nevertheless, this disc provides the listener a snapshot of Johnson’s precision trombone style; pleasing musical arrangements; and a glimpse into the talent of Johnson’s guests. As the leader, Johnson takes the featured position during solos and gets a little longer to develop his ideas. He displays a strong sense of melody on “Capri” where he intersperses variations on the theme throughout his solo. The ballad “It Could Happen to You” places Johnson in the only quartet ensemble of the date (Brown and saxophonist Heath lay out). This number captures the essence of the leader’s trombone sound: limpid and pristine notes. No slurred, indistinguishable lines here. He sounds almost as if he is playing a valve instrument. On “Turnpike”, drummer Clarke accentuates the opening melody via buzzing open hi-hat rolls that support the catchy, albeit conventional-sounding, theme stated by the horns. Brownie’s blistering solo provides some upper-register pyrotechnics. “Sketch 1” illustrates more thematic arrangement: Jimmy Heath assumes center stage—not through extemporization, for he takes a hiatus from solos—by dominating the opening melody and closing reprise. The reverberating thrum of his baritone matches the medium tempo, vaguely melancholy theme. Heath and Johnson blow booming accents below Brown’s muted solo.

The scrupulous Blue Note restoration of this early J.J. Johnson recording with the label and the presence of Clifford Brown in a strong front-line recommend this disc as an excellent introduction to one of Jazz’s premiere trombonists.