By DAVID RICKERT
September 1, 2000
Sign in to view read count 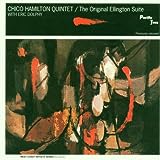 Every jazz fan spends countless hours scouring the cut-out bins and used record stores looking for buried treasure. If they’re lucky, they find an out of print Blue Note, like the copy of The All Seeing Eye that I found in a record store in Portland, or incredible bargains, like the copy of Happy Frame of Mind that I found for four bucks in Columbus. Sometimes one can even find a CD that they never knew about. But how many people can claim to have found an album that no one knew existed, not even Michael Cuscuna? Such is the intriguing story of the recently issued Original Ellington Suite by Chico Hamilton.

Apparently a jazz collector in Brighton, England found a record in a local store of The Ellington Suite by the original Chico Hamilton Quintet. However, he later discovered that his copy featured a long lost test pressing of The Ellington Suite featuring the second incarnation of the Chico Hamilton Quintet with Eric Dolphy. Michael Cuscuna (who had been looking for this session for twenty years) transferred the vinyl test pressing to CD and released it.

And what a treasure it is. Chico Hamilton, a West Coast cool jazz musician, managed to come as close as anybody to creating a jazz “chamber music” by featuring cello, guitar, and reeds in his bands and leaving the piano out altogether. This creates an incredibly warm, classical atmosphere which somehow manages to swing at the same time. A prime example is the moderately paced It Don’t Mean A Thing which features excellent call and response work from Dolphy, Gershman, and Pisano. It seems completely written out, but yet feature excellent solos from all three. Also like a traditional suite, there are no breaks in between songs (although I get the feeling they were strung together in post production).

For Dolphy fans, this probably comes close to The Illinois Concert in terms of significance. Dolphy, although not as much of a maverick player as he would later become, still manages to push the boundaries of the cool jazz setting here, like a cubist painter adding to an impressionist work of art. This recording showcases a young Dolphy before he sat in with Mingus, Oliver Nelson, and created Out to Lunch. Fans of his will enjoy hearing him play in a completely different setting, beginning to probe and question what could be done with jazz.

Who knows what other treasures may be lurking in the bins of obscure record stores? Will we one day find a complete album of the Thelonious Monk Quartet with John Coltrane? This CD is a testament to what a bit of faith, perseverance, and good luck can bring.

In A Mellotone, In A Sentimental Mood, I'm Just A Lucky So and So, Just A-Sittin' and A-Rockin', Everything But You, Day Dream, I'm Beginning to See the Light, Azure, It Don't Mean A Thing.