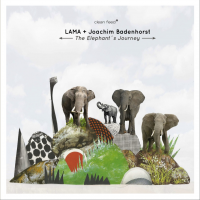 Lama's first disc Oneiros (Clean Feed, 2011), was in trio, and saxophonist/clarinetist Chris Speed was their guest on the live recording Lamaçal (Clean Feed, 2013). His interaction, and Badenhorst's here, marshal the sound into an all-inclusive expression. The music here has more of a compositional feel, maybe it is because they have chosen inspiration (and titles) from great works of literature, dedicating songs to Haruki Murakami, Dostoyevsky, Kafka, Cervantes, Somerset Maugham and the title track by José Saramago.

Badenhorst, a rising star on clarinet, especially stands out here with his bass clarinet, which swaddles the crisp sound of Santos Silva's trumpet. The band executes their post-modern sound with the flavors of contemporary electronic music, pieces of rock, chamber jazz, and a kind of post-bop filtered through a European sensibility. The opener, "Razor's Edge," crackles with the snap and pop of sampled vinyl dust and the ethereal wash of horns before it opens itself into the urgency of "The Process." The music flirts with a two-horn conversation over an appealing groove before the sound of an old fashioned dial-up modem is heard. Like the literature referenced, each piece incorporates surprise. The complexity of "Crime & Punishment" is driven by Smith's drums, as is the heaviness of "The Gorky's Spy," which sounds like it could be a cover of a tune penned by Kurt Cobain. The title track best captures this band's modus operandi, with equal parts composed and improvised music. Badenhorst is free to fly here on bass clarinet with his circular breathing and extended solo. The music sizzles with energy and a certain controlled abandon. The ending piece, "Don Quixote," is permeated with a comforting hush; Santos Silva and Badenhorst's horns levitate over the huge bass notes of Almeida and brushwork of Smith as the music is warmed by an electronic stew.