By DOUG COLLETTE
March 8, 2014
Sign in to view read count 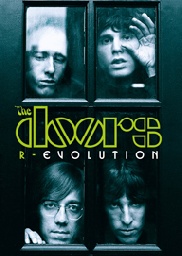 The pristine clarity of the audio and video content on The Doors' Re-evolution, much of it unreleased, lends a ghostly quality to the film, perhaps to an even greater extent than its creators imagine. Not intended to be definitive, this two hour-plus compilation of music videos and conceptual pieces instead illustrates the ever-growing legacy of this iconic band.

From the staged likes of the 'music film' for "Break on Through" to the similarly lip-synced likes of performances on Dick Clark' "American Bandstand," the Doors are in their own world. Quaint and contrived as their surroundings sometimes look (mimicking "Light My Fire" on a fire truck after a quick shot of a house aflame), the band itself evinces a style as natural as it is haunting in both their appearance and their sound. Lead vocalist Jim Morrison is no more or less stoic than his bandmates, guitarist Robbie Krieger, keyboardist Ray Manzarek and drummer John Densmore, at this early juncture of their career.

The Doors' evolution is comparatively swift from early in 1967 to September of that year, for a piece introduced by New York radio bigwig Murray 'The K' Krugman. The appearance of on-lookers wearing stockings over their own faces during "People Are Strange" compensates for the otherwise contrived likes of Morrison shown mouthing the lyrics while, sans instruments, Krieger, Manzarek and Densmore feign involvement in the performance (a decidedly more jarring alternate cut of which appears later on the disc).

The Doors' public cachet was beginning to fade on some fronts in 1968, so their offering of an imagistic video based on "The Unknown Soldier" counteracted accusations of sell-out and creative stasis circa Waiting for the Sun (Elektra, 1968). Naturally, then as now, naysayers could toss critiques of pretension at the group, but the shots of napalm runs in Vietnam, intercut with footage of celebrations of the ends of previous world wars, remains as relevant as it is provocative.

It's hardly surprising the group looks particularly removed during the street scene promo performance of the slight "Hello I Love You," for German television. Similarly, Morrison looks as if he struggles to keep a straight face as her performs (in by then trademark leather trousers) in front of orchestrated horns and strings during "Touch Me" on The Smothers Brothers CBS program later that same year. Call it creative friction or creeping ennui as the Doors struggle in their roles as rock stars, footage of studio recording captures the band at odds with itself and producer Paul Rothchild as they collaborate on "Wild Child" from The Soft Parade (Elektra, 1969).

A montage of clips from latter-day concert appearances, not all of which comes from the stage, barely scratches the surface of The Doors live experience as they approached, then retreated, from clashes with police and their audiences. The threat of impending jail time resulting from Morrison's now famous Florida confrontation restored some sense of gravity to the band as evinced in black and white footage. During work on L.A Woman (Elektra, 1971), recording the blues-derived "Crawling King Snake" features simultaneous acknowledgment and disdain for his 'Lizard King' persona as Morrison refuses to face the camera for the duration of the clip (then again neither does the rest of the band, emblematic of their own focus).

The Doors organization's loyalty to the group's history, questionable as it has seemed with the string of compilations and reissues in the past, comes in credible form on R-Evolution's inclusion of unusual creations: a somewhat disjointed patchwork quilt of images appeared in 1983, while 1966's overly-long (parody?) piece "Love Thy Customer" based on Ford Motor Company commission, recalls the fractious discord that arose within the group based on product endorsement at the height of their popularity.

Of the additional bonus features, a quick excerpt from The Doors' Isle of Wight appearance in 1970 suggests how powerful they remained in performance when they all concentrated: the music is alternately eerie as it is assaulting, effects to which the hirsute Morrison fully contributes. Eventually digressing into an examination of their career path, the documentary "Breaking Through the Lens," initially illuminates the main content of this disc through interviews with Manzarek, guitarist Robbie Krieger and drummer John Densmore, long-time engineer/archivist Bruce Botnick and the late visionary founder of Elektra Records Jac Holzman (excerpts of which serve as commentary available as an option with the sequence of videos-a much different but legitimate viewing method).

With or without the commentary option provided in the disc menu, the perspective on the band, as well as its collaboration with the label, prior to their signing (and that of their City of Angels peers, Love) solely a folk axis, reaffirms the ambition behind the music itself as much as the essays in the booklet within the package (a 40-page hardback book appears in deluxe editions available of both DVD and Blu-Ray).

A conceptual piece of cinema from 1984, based on "People Are Strange," constitutes something of a tribute to its author Manzarek, who passed away in 2013. But the movie overstates its point as heavily as a similar creation from the next year, for "LA Woman," fails to make one. A collaboration of the three surviving Doors, the mid-nineties exhumation of "Ghost Song" and its attendant video is more effective homage to Morrison and the enduring quality of the band than the records they made after his death in 1971, illustrating how R-evolution, in its best moments, captures the arresting qualities of their art, sans theatrics.

Running Time: 154 minutes approx. Bonus Features: Love Thy Customer (music by The Doors): Ford Training Film-1966. Outtakes: Malibu U-1967; Break On Through (To The Other Side)-Isle Of Wight, August 1970; "Breaking Through The Lens" documentary.