The Doors: Live At The Isle of Wight Festival 1970 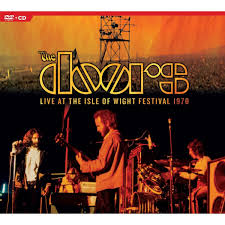 Inveterate naysayers will inevitably disparage continuing archive releases by The Doors and, to some degree, it's a point well taken: is there any band with a comparable catalog and a greater preponderance of reissues? Yet negativism ignores a crucial point in the issue of titles such as the heretofore-unreleased Live at the Isle of Wight Festival 1970: this latest title, like its predecessors may be that very one that plants the seed of curiosity (or nurtures a previous one) in a musiclover that leads to greater appreciation of this influential group.

Rumors of missing footage or doctoring of that included here (with additional crowd noise and applause) quickly become moot via the bonus inclusion in this package of the featurette "This Is The End," Not only does this close to twenty minutes lend validity and value to the combo set or its Blu-ray counterpart, it's the perfect short subject and introduction to the main content: it frames one of the Doors' final performances from multiple perspectives, the most significant of which lie in the context of the serious fallout from the Miami concert incident of 1969, from which came criminal charges against Morrison and cancellation of all the remaining dates of that tour.

That the double-disc package otherwise lacks any booklet or much other printed historical content may well be more than just reasonable restraint from overstatement as has occurred with other titles such as Feast of Friends (Eagle Vision, 2014) and R-Evolution (Eagle Vision, 2013) (the only traces of which, as usual, appears here from the voluble likes of the late keyboardist Ray Manzarek). Yet interviews with bandmembers, drummer John Densmore and guitarist Robbie Krieger, along with manager (at the time), Bill Siddons, buttresses the main content as a statement of its own. And n the notwithstanding the relative technical merits of the various formats, the compact disc allows for use its as soundtrack for the personal mind-movies of Doors fans and like-minded others (not to mention an appropriate ease of mobility and facility with headphones).

With some shadowy imagery precluding some perception of Densmore's playing, the predominant red light illuminating the concert footage lends spectral air accentuated by John Albarian. The producer/director applies nominal split-screen shots, super-impositions and dissolves to the original camera work of the team supervised by filmmaker Murray Lerner's (who also conducts those aforementioned interviews), the sequence of which follows the internal rhythm of the somewhat hushed performance.

Jim Morrison is fully-bearded and somewhat disheveled-looking, perhaps as much due to jet lag and a two-AM start time, but his restraint is representative of the Doors' overall approach here. "Back Door Man" is a more ominous beginning in place of the usual "Roadhouse Blues" (played over the film's opening), yet wholly appropriate to the circumstances as described in Siddons' pragmatic account : the singer and self-styled poet was wholly sober and stood almost stock still for the duration of the single set.

It's a approach far removed from the lighthearted air 'the Lizard King' radiated Live at the Felt Forum (Rhino, 2009) at the beginning of this same year. Or his fanciful, erratic attitude during Live At The Bowl (Eagle Vision, 2012) for that matter. Had circumstances not led Morrison to Paris after the completion of the final album by the original four-man lineup, LA Woman (Elektra, 1971), this collective restraint and concentration might well have foreshadowed the future of the Doors live. Jim channels his energy into his singing, recitation and impromptu insertions of within "The End," including a medley of "Across the Sea"/"Away in India"/"Crossroads Blues"/"Wake Up," the energetic amalgamation of which was in lieu of the famous middle-portion as originally recorded and performed.

The man's physical abandon may have been lacking in this performance, but not his imagination. Nor really the intensity of his vocals or the instrumental accompaniment of the band either; despite a stunted transitional close to "Light My Fire," the penetrating nature of the musicianship is equal to that of the singer's own piercing delivery, whether the Doors are stretching out, as on the courageous mid-set insertion of "When The Music's Over" or the relatively reined-in "Ship of Fools" (here a cutaway from the stage, perhaps necessary due to concerns about visual clarity, fosters commentary on the festival-goers as also pictured at the outset of the film).

Almost as clear as the sonic pulse of the band, thanks again to engineer Bruce Botnick, the video of this last Doors performance committed to film adds to the mystique of the band, especially its deceased frontman, despite its purported shortcomings. As a result, those expecting wild, circus-like behavior, as no doubt did many in this half-million count festival crowd, may well be perplexed. Chances are good, however, that such observers will be prompted in fairly short order to delve further into the lore surrounding the Doors, the iconic stature of whom comes across in no uncertain terms, albeit in slightly muted fashion, during Live at the Isle of Wight Festival 1970.