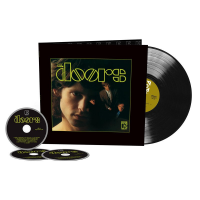 In his usual evenhanded, deceptively passionate prose for The Doors' 50th Anniversary Deluxe Edition, David Fricke neatly encapsulates the combined personal and universal significance of the record. Released in January of 1967, the quartet's debut album, produced by Paul Rothchild, predates other monumental titles of the year—The Beatles' Sgt. Pepper (Parlophone), Jefferson Airplane's Surrealistic Pillow (RCA, 1967), Cream's Disraeli Gears (Atco, 1967) and Jimi Hendrix' Are You Experienced? (Track, 1967)—effectively setting the stage for the cultural paradigm shift at this point in just its nascent stages.

The band adopted the most conventional means of jamming by extending the solo section for "Light My Fire," which allowed for a convenient edit to make the track suitable for single release, the popularity of which eventually made the Doors a household name in the 'Summer of Love.' Densmore, Manzarek and Krieger's ability to maintain the taut drama of the lead singer's own spontaneity came into play during the near twelve minutes of "The End" on the album and on stage, as captured by the forty-minutes plus of Live at the Matrix recordings in this deluxe edition.

Unlike the previous releases from this venue ( and other concerts of the period) as recorded in March of the year the studio album came out, these eight tracks derive from recently-discovered soundboard tapes. Startling by their aural clarity (recalling engineer Bruce Botnick's technical expertise on previous archive titles such as Live at the Bowl '68 (Elektra, 2012), these takes also offer retrospective revelations of the band's (not just Morrison's) vivid collective persona, provided by "Alabama Song (Whiskey Bar)," blues icons Willie Dixon and Howlin' Wolf's "Back Door Man," and other highlights of the Doors' repertoire of the time, most conspicuously. the definitive stylistic and thematic compositions "The Crystal Ship" and "Break On Through."

Not the first releases from performances at San Francisco's Matrix Club (originally opened by the Airplane's Marty Balin in 1965), but the first of this sonic superiority, the inclusion of this material here adds to the multi-leveled backstory Fricke relates in his piece (a modified version of an article that originally appeared in MOJO Magazine). Conflicting stories about studio activity are less informative than once and future engineer Botnick's insight, particularly when it comes to the incorrect speed of the original mastering of The Doors (corrected in 2007 and preserved here).

And Jac Holzman's invaluable take on the process of bringing the band to Elektra Records, thus elevating a comparatively small folk-oriented operation to major label status, is punctuated with his tale of playing the finished album for one of his 'stars,' Judy Collins (who, by the way, gave validation to the signing). Those multiple sequences of events, however, are less arresting than the processes by which the Doors balanced live gigs with recording at this early juncture of their career, the result of which created an image that's carried them through more than a few revivals over the five decades since this album first came out (not to mention repeated reissues, of which this latest will seem just another so-called 'cash grab' to the naysayers).

The Doors' commercial breakthrough was as significant as their creative epiphany because it was indicative of the inroads the counter-culture would make into the established methods of the record business during this period, as albums took precedence over singles, all of which metamorphoses render most appropriate the ornate design of The Doors' 50th Anniversary Deluxe Edition. The 12"x12" hardcover houses three cd's as well as a vinyl LP (which, in its CD premiere, contains remastered mono sound functioning as a metaphor for the band's relationships as captured in the overlapping photo images on the front and back cover). A proportionately-sized twelve-page booklet includes Fricke's writing juxtaposed with an array of period photos as well as meticulous technical details of the recording (most notably perhaps the additional contributions of Larry Knechtel on bass to fortify the group's sound in the studio), the sum total of which is a package commensurate with the profound influence of the music therein.