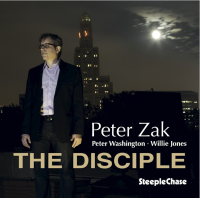 Pianist Peter Zak had a transcontinental shift from Los Angeles to Columbus and Kent Ohio and, finally, to New Your City, where he has remained since 1989. He has released critically well-received CDs for the Danish SteepleChase label: The Eternal Triangle (2012), Nordic Noon (2011) and Down East (2011). He returns with the present trio recording, The Disciple.

The jazz market is a small land finicky one. It is really no longer possible to simply put together a piano trio recording of original and standards that stands out from the battlefield clotted with the same. The smarter artists, like Zak, add a program or theme to their recordings, something that gives an otherwise disparate collection of pieces some continuity or integrity. In the The Disciple, this integrating factor are compositions by pianists Zak has be influenced by, and that list is impressive.

Zak opens The Disciple with a circular performance of Chick Corea's "The Loop." He follows this with one of three originals he peppers the recording with. Representing Elmo Hope, Zak selects "Barfly," Hope's "'Round Midnight." Zak and his responsive trio of bassist Peter Washington and drummer Willie Jones III give the piece its necessary crepuscular after-hours spirit.

Horace Silver's "Nutville" is provided a solid minor-key accompaniment over which Zak waxes poetic with hard bop riffs and roars. Truly inspired is Zak tossing in a Scriabin Prelude (Op. 35 #2) into the mix making this quite an interesting collection. Performances of Herbie Hancock's "Requiem," Hampton Hawes' "Jackie" and Thelonious Monk's "Criss Cross" amp up the drama.