David Murray and the Gwo ka Masters: The Devil Tried To Kill Me 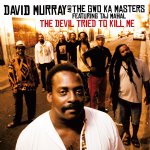 Recorded in Pointe-a-Pitre, Guadalupe's largest city, the recording is an emphatic celebration of the island's proud past and compelling present—reminding of its history of slavery, struggle, and independence before integration into France (circa 1794). The music is fueled by the indigenous beats of Gwo ka drums, stirring vocals and lyrics that speak life—as Murray states in the CD's liner notes, ..."music that is aimed towards the future."

The heartbeat of the Gwo ka is undeniable, starting with "Kiama For Obama," its pulse growing feverishly by the drumming and voices of Klod Kiavue and Francois Ladrezeau as the other band members improvise over the contagious theme. The cadence slows on "Africa" as Taj Mahal sings poignant lyrics of love and healing to the beautiful continent and its people, with Murray echoing the sentiment via a warm baritone solo.

"Congo" and "Canto Oneguine" are Afropop-influenced tracks that continue the recording's upbeat spirit, as the Gwo ka masters provide fervent call and response verses to the band's incessant playing. Radio-edits of "Southern Skies" and "Africa" are thrown in for those who want shortened versions but are otherwise redundant. It would have been better to have more tunes, especially with Sista Kee and Taj Mahal. Regardless, David Murray and the Gwo ka masters have created another stupendous release that makes the trip to Guadalupe an extraordinary journey.