Mike Rood: The Desert and the City 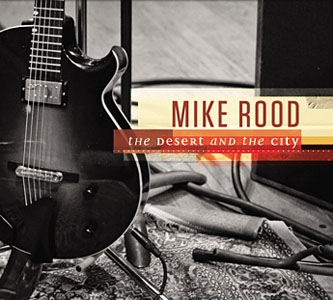 Mike Rood's The Desert and the City opens with an eerily ambient groove employing some unusual techniques—repetitive picked chords and some almost techno rhythmic phrasing—to create a fascinating soundscape. What's noteworthy about this effect is that it's accomplished with a very straightforward ensemble: Rood, accompanied by acoustic bass, drums, and saxophone. The effect of the opening title track sets the pace for what unfolds as a measured, beautifully crafted date of quietly insistent tracks.

Rood is clearly more concerned with the composition and mood of his music than with its value as a platform for self-indulgent soloing. Everything fits together in a balanced, well considered order. He plays cleanly, with no distortion or effects except some judicious use of the volume knob to periodically fade chords in and out. And while he plays equal measures of layered chords and fingered arpeggios, he does so with such a gracefully uniform tone that that it's easy to get lost between them and just float away on his playing.

Saxophonist Mike Bjella falls into the music readily, sometimes supporting the ambiance by using his horn as a staccato rhythmic support, and sometimes blending more traditional soloing into Rood's harmonics. At every turn he is complimentary to the session's atmosphere, and turns in a fine performance overall.

By the time they get to the closing "Dark Star"—an original composition, not a cover of the Grateful Dead—the band has gone into full atmospherics, with drummer Goh Izawa tapping out subtle patters on cymbals, and bassist Alex Sprading pulling it along in a freer, but still connected bottom end. But the track challenges the musician's desire to drift: just as it seems it could all veer off into space, the composition pulls it tightly back together with a solid 4/4 kick drum beat. But the solidity only lasts for brief minute before the song dissolves back into its looser origins, finishing with just the guitar and horn fading out. It's more than just a jam; it's a strong example of a track that journeys through stages of loose melody, intervention of rhythm, and back again.

The Desert and the City works best taken in its entirety; its consistent vibe, originality, and first-rate musicianship making it well worth the investment in time.

The Desert and the City; Atonement; The Gate; Uncertainty; The Reckoning; Curious Eyes; Undeniable; Dark Star.

Title: The Desert and the City | Year Released: 2011 | Record Label: Self Produced