By DOUG COLLETTE
November 3, 2012
Sign in to view read count 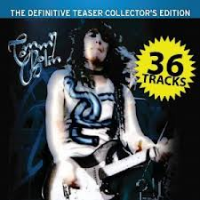 Guitarist Tommy Bolin elevated the role of journeyman to a high art. After leaving his home in Colorado, where he played with Energy and Zephyr, he worked with fusion drummers Billy Cobham and Alphonse Mouzon, joined a post-Joe Walsh James Gang, and went on to Deep Purple when Richie Blackmore left the group. All of this occurred before and during a solo career, which began with Teaser, a remastered, expanded version that confirms Bolin's versatility as guitarist, songwriter and singer. The original nine tracks resound with musicianship consisting of a varying lineup of sidemen including: Mahavishnu Orchestra keyboardistJan Hammer,Genesis drummer Phil Collins, and saxophonist David Sanborn. Tracks such as "Wild Dogs" and "Homeward Strut" show Bolin could lead a band in more ways than one.

The explosive funk-driven opening that is "The Grind" suggests Bolin's intelligent facility with a song, while the quiet likes of "Savannah Woman" reaffirms that songwriting skill— not to mention his natural instincts as a vocalist. The structure of the title song extends to the largely improvisational likes of the six unreleased numbers on two other discs of outtakes and alternate versions from the original sessions. They suggest the source of the continuing resonance of this album some forty years after its initial release and Bolin and co-producer/engineer Dennis McKay had plenty of ideas to work with as they used only those most effective.

Available on its own, as well as part of a box set with the expanded three-disc Teaser, a double-disc package titled Great Gypsy Soul furthers the concept of The Definitive Teaser Collector's Edition. One disc, co- produced by Gov't Mule guitarist Warren Haynes, finds such luminaries as guitarists Peter Frampton and John Scofield adding their readily identifiable styles to tracks from the original sessions, while the second disc is largely comprised of an original extended piece inspired by Bolin's instrumental "Marching Powder." Four movements include Aerosmith guitarist Brad Whitford and Haynes, not to mention guitarist Derek Trucks, flashing his inimitable power, the sum effect of which is a focused, inspired music not just reminiscent of the album from which it is derived, but of a piece with it.

Other titles of Bolin remain available from his own archives, not to mention a second solo album Private Eyes (Columbia, 1976) and a two-CD version of his sole Deep Purple studio work Come Taste the Band (EMI, 2010). But, if the late lamented musician could choose a work by which to be remembered best, odds are in the favor of Teaser, and this package, notwithstanding its less than exemplary graphics design, documents why.