Tony Monaco: The Definition of Insanity

By MARK CORROTO
February 1, 2019
Sign in to view read count 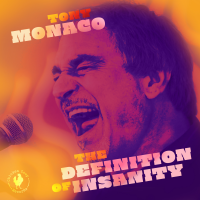 Did you order it? Somebody ordered the party platter, because B3 maestro Tony Monaco is delivering. His music is for all intents and purposes a celebration. With The Definition of Insanity, a reference to doing the same thing over and over again and expecting a different result, he confesses to be under the influence of the same mania as the legends Jimmy Smith, Brother Jack McDuff, Reuben Wilson, Richard "Groove" Holmes, and Jimmy McGriff. If this man is insane, I say we spread a bit of his madness into these demented times.

Monaco doesn't stick to a strictly soul-jazz program, but everything he plays here is infused with a profound soulfulness. Opening with a cool run through the Phish tune "Cars Trucks Buses," his quartet circles the jam-band school with guitarist Derek DiCenzo's jangly notes and the Orleans swing of drummer Tony McClung. Monaco intends to take us through an assortment of emotions during this party. He shifts into Lee Morgan's bossa nova with "Ceora," then pulls the rug out with "Root Down," which fans of the Beastie Boys will instantly recognize from their recording Ill Communication (Grand Royal, 1994). The music was actually sampled from Jimmy Smith's 1972 composition "Root Down (and Get It)." Monaco's version, with the funk spread thick by DiCenzo, give a nod to the Boys, but retains the feel of Smith's version. Head swimming by now (and it should be), Monaco shifts into the (often considered banal) Italian pop tune "Quando Quando Quando." Like much of Monaco's party music, he can inject life into a corny corpse. Even the Grateful Dead's (imagine Jeffrey Lebowski telling his cab driver, "I've had a rough day and I hate the Dead") "Truckin'" rallies with a certain glint that satisfies both the jazzbo and neo-hippie.

But, it ain't a party unless Monaco delivers a sermon. Here, we get three vocals by the organist. "Never Let Me Go" adds piano by Asako Monaco, Tony's wife. The Leon Russell classic "A Song For You" is delivered with Monaco playing some piano then organ, and on the traditional Neapolitan song "Non Ti Scordare Di Me," he adds accordion to his vocals. Bravo maestro, bravo.