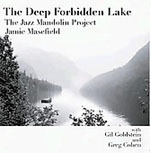 While the Jazz Mandolin Project has been a collective of sorts in the past, with a revolving door membership that has included Phish guitarist Trey Anastasio and bassist Stacey Starkweather, it's really always been mandolin player Jamie Masefield's baby. And so, the Project's latest release, The Deep Forbidden Lake, is essentially a Jamie Masefield solo effort, with pianist/accordionist Gil Goldstein and bassist Greg Cohen sitting in as guests.

Whereas earlier JMP releases were sometimes lumped in with jam bands like the String Cheese Incident and Phish, The Deep Forbidden Lake is far removed from that aesthetic. More a collection of favourite songs treated with a great deal of reverence, it's perhaps even a stretch to call this a jazz record. The pop/folk material represented (by Neil Young, Tom Waits, Leonard Cohen, and Radiohead) isn't reharmonized in any particular way; the emphasis here is more about being faithful to the spirit and ambience of the song. Masefield even goes so far as to include some electronic processing for the Radiohead tunes, which might at first seem a little out of place in the more acoustic and organic context of the rest of the set, but ultimately works well.

Along with the pop/folk tunes are a handful of compositions more closely associated with jazz—Django Reinhardt's "Tears and "Black and White, Horace Silver's "Peace, Billy Strayhorn's "My Little Brown Book, and Ornette Coleman's "When Will the Blues Leave (a rather surprising choice). With the exception of the Coleman piece, which is treated as idiosyncratically as one might hope—Goldstein even plays a toy piano—the material is again treated with reverence for its original form. The Coleman track, which closes out the disc, is also the only piece that is anything but relaxed, lyrical, or quiet.

And so The Deep Forbidden Lake is a collection of some of Masefield's favourite songs, treated with respect and, as Masefield has said, "less about grooves and exploration. Some might consider this to be a safe approach, but the album ultimately captivates with its simplicity, honesty, and lack of assumption. Masefield has already proven on previous Jazz Mandolin Project recordings that he's got the chops and so, for this release, he forgoes anything but the deepest concern for melody and elegant solo construction. Both Goldstein and Cohen, players who have proven themselves in a variety of contexts, are in the same musical headspace, treating the material with a kind of folk-like naiveté.

For those looking for great adventure and exploration in their music, The Deep Forbidden Lake will probably be something of a disappointment; but for those who enjoy the purity and truth of song, Masefield has created an album that captures the material's essence and delivers it in an elegant and calming way that is sure to appeal.

Wintersong; Ol' 55; Hallelujah; Tears; Peace; Everything in its Right Place; My Litte Brown Book; Tom Traubert's Blues; Black and White; I Will; The Deep Forbidden Lake; When Will the Blues Leave