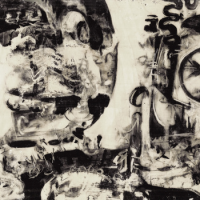 One trio. One guest. A single, forty-two minute, freely improvised piece. That's what you basically have here, but such a bare description doesn't do it justice.

The Core Trio—a group that has yet to actually record as a stand-alone trio—has an interesting history that seems to always revolve around personnel twists. The group came to exist as a three-piece when the members of an avant-garde quartet called Rosta decided to disband, but that was just the first of several changes. The Core Trio's first recording brought the core membership—saxophonist Seth Paynter, drummer Richard Cholakian and bassist/leader Thomas Helton—into contact with pianist Robert Boston. He stoked the flames of inspiration within the group, perhaps inspiring them to continue working with guests in the studio. Shortly after that recording was released in 2013, Cholakian decided it was time to move on. So, after some deep thought, the group agreed to carry on, bringing drummer Joe Hertenstein in to fill the vacated drum chair. Then the second incarnation of The Core Trio decided to add pianistic provocateur Matthew Shipp to the equation for its sophomore release. And here it is.

Over the course of forty-two minutes, this foursome manages to create wonderful peaks and valleys, working cacophony, curiosity, chutzpah, and class into the music. Shipp is audacious and brilliant as ever, delivering two-handed chordal tantrums, short and insistent phrases, ascending single-note queries, thoughtful ruminations, and plenty of other surprises. The Core Trio is every bit his match. Paynter connects with Shipp at the musical ceasefire near the nine-minute mark, rides the waves of excitement with the rest of the band, and delivers a few compelling stand-alone statements, ranging from the chirpy to the hypnotic; Helton's slippery arco work and quizzical pizzicato playing grease the wheels throughout; and Hertenstein's shifts, from smash-and-bash drumming to loose-limbed free play to focused sound painting, add and subtract volume(s) from the picture.

While plenty of eyebrow-raising occurrences take place place during the course of this journey, the most surprising of all is how the group takes on the mantle of the swinging quartet around the thirty-six minute mark. After more than a half hour of storms and reprieves, it's the last thing that could've been expected, but one of the many bright spots on this powerful recording.

About The Core Trio