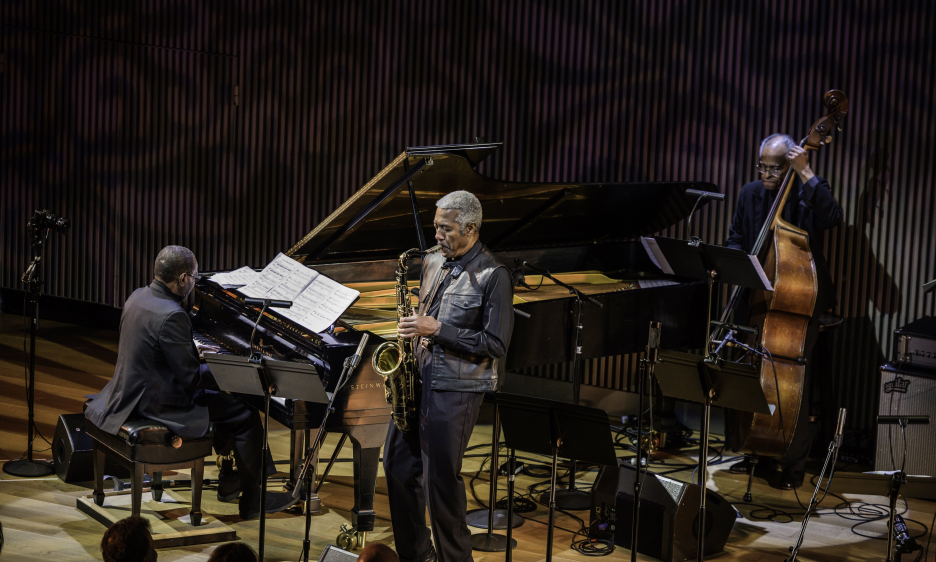 In the history of the set of musical styles known as jazz, there have been very few groups that are termed "super groups." The Cookers—composed of highly accomplished musicians eminently comfortable and in tune with each other—are the best contemporary example of venerable musicians coming together in a cohesive whole. The band is named after The Night of the Cookers (Blue Note, 1965. Recorded at Brooklyn's Club La Marchal, on it Freddie Hubbard joined with saxophonist Lee Morgan and others to record one of history's classic live jazz LPs.

The six members of The Cookers took the stage at SFJAZZ and went to work right away on Billy Harper's "Call of the Wild." A brief solo by gray-topped Harper on tenor sax was swiftly followed by gorgeous piano from George Cables before the entire ensemble came in, including the heavy-fisted drummer Billy Hart, followed by yet more dynamic tenor from the legendary Harper. David Weiss then moved in on his trumpet; the horns then stepped back to allow the trio of Cables, renowned bassist Cecil McBee and Hart to flourish. All rejoined to take the tune out; Hart ended it with a drum roll.

Next up, a George Cables composition led off with a horn chorus. Hart held down a pounding backbeat as shaven-headed trumpeter Eddie Henderson played with dynamism. Donald Harrison then stepped to the front and stepped in for an energized and soaring alto sax solo before the group slimmed down to trio format; Cables soloed on piano; then the horn section re-entered with applause to conclude.

"Croquet Ballet," a bold Harper composition featured on The Last Session (Blue Note, 1971), the last date ever recorded by Lee Morgan, was up next. It was initiated with a horn chorus; this gave way to Harper soloing regally as Hart merrily drummed. Henderson then led the group as Hart worked out on the sticks. Harrison returned to shine before the group was again pared down to bass, drums and piano. The horns returned, with Henderson adding tonal highlights. Weiss called the band as the tune ended.

After a break, it was time for Cables' "Mystery of Monifa Brown" which began with some one-handed piano accompanied by sparse percussion before gearing up when a horn chorus, led by energetic playing from Harrison, took command; then the horns stepped back, and a trio took hold before the horns re-entered once more to finish.

It was then bassist McBee's turn to shine. His composition "Peacemaker" saw a horn chorus give way to an inspired trumpet solo from Henderson and then another horn chorus and another alto sax solo from Harrison before McBee delivered a sinuous and winding and intricately figured bass solo. Henderson's trumpet brought the piece to a close.

Weiss announced that "It's time to slow things down," and Cables soloed lyrically on piano to introduce Henderson's ballad "If One Could Only See." Interplay between the horns followed; then Henderson delivered a lovely solo, with Hart accompanying him on brushes. More ethereal soloing from Cables followed. A solo from Henderson brought the tune to its conclusion.

A standing ovation brought the band back for "The Core," a Freddie Hubbard composition first featured on Art Blakey & the Jazz Messengers' Free for All (Blue Note, 1964). Hubbard intended it as both homage to CORE (Congress of Racial Equality) as well as testimony to his belief that the tune "got at some of the core of jazz—the basic feelings and rhythms that are at the foundation of music." It was a great conclusion to a fine concert by an unforgettable band.