New York claimed all jazz east of Kansas City and basically thumbed its nose at the West Coast and Contemporary Records stood as a transition state between the 'Hot' East Coast Style and the 'Cool' West Coast Style. 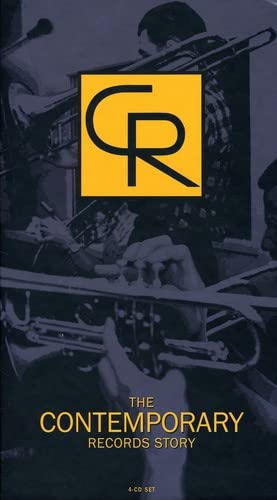 It would be difficult, unfair, and even fool hardy to argue what jazz record label has impacted the genre the most. Did Prestige have more impact than Savoy, is Blue Note the greatest jazz label of all time? Questions like this make as much sense as arguing about evolution or if the narrative claims of The Da Vinci Code are true. However, if one narrows the scope of the discussion regionally, the question, "What was the most important West Coast Jazz label?"? That answer can be easily answered and defended - Lester Koenig's Contemporary Records.

The label was founded in 1951 by Lester Koenig, an exile of the Los Angeles film industry as a result of his refusal to testify before the House Un-American Activities Committee. Left with no way to make a living in film Koenig turned to making music, Classical at first and then jazz. Koenig had a very specific idea of the type of jazz he wanted to produce. Shelly Manne, Lennie Niehaus, Andre Previn, Barney Kessel, and Ray Brown all produced a brand of urbane and complex jazz that was to be the boon of he intelligentsia. However, the label also manifested a second, more emotive side of the dual character of the West Coast Los Angeles jazz environment. This brand of jazz stood in stark contrast with the largely Caucasian "cool school" (often associated the Pacific Jazz Label). The contemporary brand of Jazz was characterized as having an edge, swing associated with secular virile hard bop as performed by the city?s African-American Musicians.

On the four-disc The Contemporary Records Story, the history of the label is chronicled as a single man?s vision of the grand unification of jazz music. Koenig ensured that consistently the visiting East Coast (Sonny Rollins), early Free Movement (Ornette Coleman, Cecil Taylor), Be Bop (Howard McGee, Dexter Gordon) and swing (Benny Carter, Red Norvo, and Ben Webster) were fairly represented. He largely accomplished his goal. However, there are two tragic American Romantic figures that far and away represent the pathos of Contemporary Records - pianist Hampton Hawes and alto saxophonist Art Pepper, each a gifted and tragic figure whose recording careers encompass the label's entire history. It should be no surprise that Hawes and Pepper are the best represented on this compilation set.

Collections like The Contemporary Records Story basically have two strikes against them from the outset. One, they are too big (and expensive) to be considered a "sampler," a format all the rage in the late 20th and early 21st Centuries. And, two, it is damn near impossible to assemble a cogent collection of essential music when the pool one draws from is largely all essential music. It is difficult to address the first problem without answering the second. Suffice it to say that The Contemporary Records Story accomplishes what it sets out to better than any similar collection in recent memory. This compilation may be seen as an aural documentary of one man?s unquenchable passion for America's greatest gift - Jazz. The true beauty of the set is that it shines a bright light on talents otherwise marginalized such as trumpeter Howard McGee and tenor saxophonist Teddy Edwards. Shelley Mann is placed at the middle of the discussion, honoring his singular contribution not only to the music but to the venue?s where the music is performed (Shelley's Mann Hole).

This music is for the most part white hot. Little of the heroin cool (though use was very prevalent) manifested itself on Contemporary as compared to Pacific Jazz. This set is closed by the Art Pepper solo horn take on "Over The Rainbow" from Live At The Village Vanguard. It is a poignant ending to a beautiful story. That story is capably captured in a set of superb liner notes with many fine and previously unreleased photographs. This is a total entertainment package.