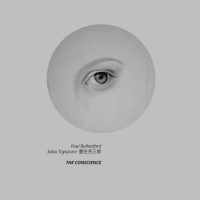 Recorded in 1999, but previously unissued, The Conscience unites iconoclastic English trombonist Paul Rutherford and Japanese drummer Sabu Toyozumi. It constitutes the first in a series of ten or so sessions from the Japanese Chap Chap label to be released by the Lithuanian NoBusiness imprint through to 2018. Both men were among the first generation of free improvisers in their respective countries. Although Rutherford died in 2007, Toyozumi remains active. Over the years he has played with just about everyone on the scene, appearing on record with Anthony Braxton, Joseph Jarman, John Zorn, Peter Brötzmann and Derek Bailey, and he was the first non-American to join Chicago's AACM.

But somehow the disc doesn't really live up to the promise of that backstory. Perhaps that's partly down to the slight echoey ambience which (together with a mobile phone ringing distantly during the first cut) suggests an audience recording. That makes a difference when nuance and detail are so important to the appreciation of this music. More pertinent is the lack of apparent dialogue. Although each seems comfortable doing what they do, it often evokes simultaneous parallel streams rather than partnership. However this get-together came a year after another album featuring the pair -Fragrance (self released, 2000) -collected from three separate dates. So it's obviously not a one off, and the artists saw enough merit with the performances to justify repeated encounters.

Rutherford negotiates a subtle but radical path. He just about invented the solo trombone oeuvre (not forgetting George Lewis of course) with Discreet Harm of the Bourgeoisie (Emanem, 1975) and pioneered lots of exciting extended techniques which are now part of every adventurous trombonist's armory. They are much in evidence here as his abstract melodicism and burnished sound also incorporate long buzzing lines, astonishingly nimble leaps into the upper registers and growling multiphonics.

Toyozumi tends to be more bombastic, at times channeling the forthright rumbling power of traditional taiko drumming. He frequently favors reiterated figures but doesn't try to keep time or set a beat, instead creating light amid the thunderous shade through the tone color play of clanging gongs and sizzling cymbals. Even though shown behind a conventional jazz trapset in the accompanying booklet, he progresses through a chain of individual events, avoiding multiple rhythms, begetting a fitful energy.

Nonetheless there is at least an occasional meeting of minds in terms of dynamics. On "Beer, Beer and Beer" a passage of galloping locomotive propulsion prompts Rutherford to phrase in tandem, while "I Miss My Pet Rakkyo" gets closest to the conversational in the give and take at the conclusion. Although the session might appeal to fans of either man, it seems unlikely to grab the uninitiated. Perhaps as with much free improvised music, you had to be there.

The first four tracks are also available as a limited edition LP.