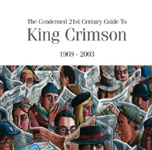 Few groups have been anthologized as often as progressive/art rock band King Crimson. Perhaps it's the group's ever-changing lineup, or that guitarist/co-founder Robert Fripp has the habit of disbanding successive groups when they've fulfilled their purpose, with long gaps between the reincarnations.

Since 2004 there have been two Discipline Global Mobile box sets documenting Crimson in great detail: The 21st Century Guide to King Crimson: Volume One 1969-1974 and Volume Two 1981-2003. The Condensed 21st Century Guide pares down these eight CDs of studio and live material to just two discs, making a terrific (and more affordable) introduction to this revolutionary/evolutionary group.

It's also a solid "best of" collection, focusing exclusively on Crimson's studio albums. In order to provide as broad a cross-section as possible, Fripp abridges some tracks, yet with one exception ("Starless," from 1974's Red), they're so seamless and respectful that listeners familiar with the unedited versions may not notice unless they're paying attention.

The first disc covers 1969-74, from the group's overnight emergence with the symphonic power of In the Court of the Crimson King, through to the more guitar and improvisation-heavy band that finished its three-album run with Red. From the metal-jazz of "21st Century Schizoid Man" to the pastoral "Cadence and Cascade," staggeringly complex "Fracture" and nuevo metal precursor "Red," Fripp's choices may not be everyone's personal favorites, but they successfully capture every stylistic milestone.

Almost. Fripp has consistently and curiously ignored 1970's Lizard over the years. The group was a transitional band; Fripp was trying to form a stable and road-worthy reincarnation following the breakup of the 1969 lineup. But the participation of a number of Britain's most forward-thinking free jazzers made it Crimson's most experimental—and most disturbing—record. It seems inexplicable that the nightmare-inducing "Cirkus" has never been anthologized by Fripp.

The second CD covers 1981-2003, when Crimson became a trans-Atlantic band with the recruitment of guitarist/vocalist Adrian Belew and bassist Tony Levin. Nearly half the disc is taken up by the 1981-84 band, where Crimson evolved into a groove-heavy yet still complex band that challenged its fans to dance in 21/8.

The rest of the disc covers the 1994-99 "Double Trio" and most recent "Double Duo," both groups moving closer to the metal edge of groups like Tool, who cite Crimson as a seminal influence. It reveals a group that has constantly incorporated technological developments into its music. The only shame is the absence of material from The ConstruKction of Light (2000). Though it was one of Crimson's weakest studio albums, the material took on new life in performance.

One wonders if Fripp can continue to reissue material ad infinitum. But this new release is, indeed, a concise collection that almost perfectly represents Crimson's long and multifaceted career.