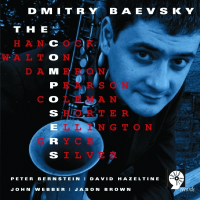 In some respects, The Composers is cut from the same cloth as Down With It, Dmitry Baevsky's 2010 release on Sharp Nine. The alto saxophonist selects seldom-played compositions from the jazz canon and executes thoughtful interpretations, so that the heads of tunes like Cedar Walton's "Ojos de Rojo," Wayne Shorter's "Mister Chairman," and Duke Ellington's "Self Portrait (of the Bean)" stand quite nicely on their own. A crack rhythm section consisting of pianist David Hazeltine, bassist John Webber, and drummer Jason Brown (the lone holdover from Down With It) offers vigorously swinging support with a relatively light touch.

By and large, Baevsky's solos during The Composers indicate a period of growth and transition. Although he's never been a rigid, totally orthodox bebopper, his playing throughout the disc's nine tracks evinces a desire to expand beyond bop's stylistic markers and dig deeper in pursuit of an individualistic voice. To his credit, Baevsky is taking measured steps and staying clear of emulating any other major post-Parker jazz saxophonist. An impressive example of his growth can be found in the first chorus of pianist Horace Silver's "To Whom It May Concern," where he mixes wispy phrases which float over the rhythm section with things weightier and more certain. The downside of Baevsky's search is an over reliance on certain motifs which begin to sound too schematic, sometimes becoming a distraction on some of the other tracks.

Two solos, in particular, represent the best of the current state of his art. As the rhythm section implies double time after a pure ballad treatment of the head, Baevsky's expansive improvisation on "Self Portrait (of the Bean)" covers considerable ground in a couple of minutes. While never completely abandoning the ballad feel, his pert, abbreviated phrases leave lots of room for Hazeltine's stimulating commentary; changes in dynamics—some subtle, others rather abrupt—add a touch of drama, and some long runs are played in a rather breathy tone. A climax of sorts occurs a few of bars prior to the end of the chorus when he digs into a handful of notes that are akin to Ellington's melody.

The six choruses on "Tears Inside" are more tightly compacted than "Self Portrait." Baevsky is a cocky, briskly efficient bluesman throughout the live wire take of Ornette Coleman's classic minor tune. His lines, simultaneously playful and resolute, evince a very real connection to Webber's deep pocket bass line. During his first chorus, the slurry, upended phrase from the head echoes three times. Later, one long run begins almost timidly and ends with a shout. The tune's title may allude to inner grief, but Baeveky's interpretation of the music is a pure celebration, and the memory of the disc's final track lingers long after the last note fades.

Ojos de Rojo; Gaslight; Mister Chairman; To Whom It May Concern; Self Potrait (of the Bean); Swift as the Wind; Smoke Signal; Three Wishes; Tears Inside.